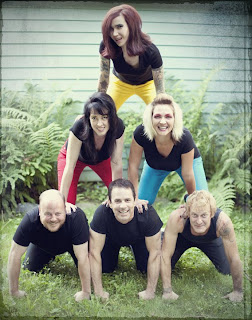 What in the hell have they been putting in the water in Portland the last ten years or so? The flow of great bands out of that city in recent years has been absolutely ridiculous. I think a colony of robots may be responsible. Maybe it’s all that rain. Every year that I’ve written about new music, Portland has loomed large. 2011 has been no different. The Cry! blew my ass away a couple months back, and now The Suicide Notes have my jaw dropping. Given the involvement of Portland punk rock stars Patrick Foss (Pure Country Gold), Tim Connolly (Epoxies), and Howie Hotknife (Mean Jeans), it’s easy to see why this new band is such a force of nature. Those dudes would be a super-group in their own right. But teamed up with not one or two but three talented female singers, they’re taking it to another level entirely. Imagine a macabre Shangri-Las with a punk edge, and you get the idea. Jessi Lixx, Miss Joseph, and Double A harmonize like they’ve been singing together forever, and already they’ve got a whole slew of amazing songs. “Hey Baby!”, probably their most conventionally “pop” song, is without doubt in Song of the Year contention. But even with its gorgeous harmonies, knock-your-socks-off chorus, and contagious upbeat energy, it’s far from your typical love song. I love how these ladies sing so cheerfully while delivering hilariously dark and twisted lyrics. Same goes for the punky surf-pop gem “Suicide Note”, which is extra ultra-peppy in spite of lyrical content that’s kinda, uh, sick! There’s definitely an early Ramones influence in this use of gallows humor, and it works especially well given the effervescent charms of all three singers. Think of this band as the sonic equivalent to the Halloween candy apple with a razor blade inside. And I love that no two songs sound the same. The danceable “Wolf Couple” comes off like a modernized Rezillos, while the near-epic “Beach Song” suggests a female fronted Simpletones or perhaps a non-futuristic Epoxies. “How Do You Know” sounds like an evil version of the Betty Everett classic “It’s In His Kiss”, while “Something at the Window” walks the fine line between creepy post-punk and poppy new wave. Damn! This is not just another “Hey, that sounds pretty good!” type band. This is more along the lines of a “Holy shit, I cannot believe how incredible this group is and I better plan my next calendar year around their record release schedule!” kind of thing. You know how I am when it comes to pop bands. I’m all about the pop. The Suicide Notes are one of the best new pop bands I’ve heard in years. You hear a lot of bands that can do amazing things with harmonies, and you hear a lot of bands who can write great catchy pop/punk songs. But rarely do you hear a band that can do both - AND pull it off with such panache and originality! Stay tuned - The Suicide Notes are gonna be special. It’s never too early to start thinking about Album of the Year 2012!