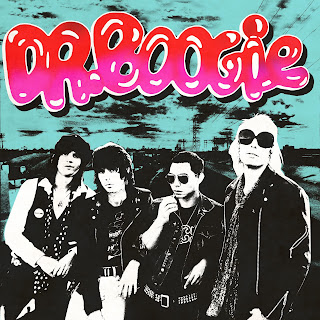 When I reviewed the new Sweet Things single last month, I mentioned that Spaghetty Town Records would be following that release with yet another killer 45. I was talking about a new single from L.A.'s Dr. Boogie - another band that perfectly fits Spaghetty Town's sleazy rock n' roll profile. "She's So Tuff" is the band's second 7" and makes a great addition to a discography that also includes a self-released CD EP and an LP on Dead Beat Records. The A-side is chock full of glam/hard rock swagger and boasts a hook I just can't get out of my head. The tune clocks in at just a hair under four minutes, but don't let the moderate tempo fool you. This one's a rocker! Those guitars are absolutely ripping, and Chris delivers a hard-edged vocal that's perfectly suited to the song. My first impression was that I was reminded of Rose Tattoo. That can only be a good thing! B-side "Peanut Butter Blues" is more in the band's Stones/Dolls inspired signature style, and it will be well known to fans. It was originally released earlier this year as a digital-only single, and now it finally makes it onto record. So this is literally a single with two A-sides!

In recent years, Dr. Boogie has received considerable acclaim as one of the bright new hopes for real deal rock n' roll. I would not argue with any of the rave reviews, and now I gladly enter one of my own. If you're looking for a nice taste of what Dr. Boogie (or Spaghetty Town Records) is about, press that play button and prepare to be rocked!