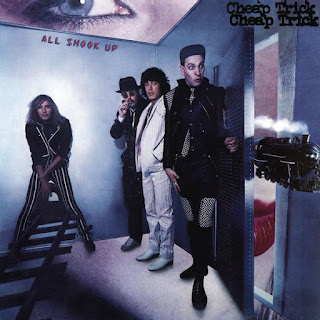 The '80s were arguably the heyday for that l'il ol' band from Rockford; Cheap Trick. During that decade, the band released six LPs: All Shook Up, One on One, Next Position Please, Standing on the Edge, The Doctor, and Lap of Luxury.

We could try to sneak Dream Police in with them, as it was released on September 21, 1979; just a little bit before the decade we shall refer to as "the '80s", mainly because that's what they were.

Since the Cheap Trick review series here at Faster and Louder has already discussed Next Position Please and One on One, pick number three is in the batter's box and the #4 selection is in the on deck circle.

The album cover was simply, psychotically cool. I can't think of another way to put it. An airborne train some feet above an airborne train track are the initial eye-catchers, but closer inspection reveals a few additional facts.

Rick Nielsen is opening the door that allows the train to enter. The gap implies that the train is emanating from the nose on the face of a woman whose head appears to be about half as tall as our heroes. Robin Zander is straddling the tracks and appears concerned.

Tom Petersson is dressed in a white suit, and Bun E. Carlos is in a hat and hapless detective trenchcoat-type attire. What does this have to do with the content of the album? I'm, ahhh, not sure.

Track two – wherever he was, he was apparently there for far too long, but now he "Just Got Back". Through the tune “It wasn’t my idea…”
A. Didn't pull the trigger.
B. Didn't point the finger.
C. What the doctor figured.
D. All of the above.

The correct answer is D. It's a really good song. And like many of the Cheap Trick quick-hit rockers, it's short.

Actually, on the original release of All Shook Up, there were 10 tunes and combined they accounted for 33 minutes and 53 seconds of your life. Not near long enough for the quality of the songs you were likely to encounter. Details of the reissue to follow the description of track 10 here!

Robin Zander handles the vocals again, and again he's all over the place. With a range like that, why in the world would he NOT be? Just trying to warn anyone who might object to an occasional screamed lyric (SPOILER ALERT! I'll be talking about that again this time around, too!).

Having just gotten back seems an appropriate time to rediscover the fact that "Baby Loves to Rock". More and more he's thinkin' 'bout love, but love ain't all he's thinkin' of.

"More and more I'm thinkin' bout s-s-s-sex. The more I get, the worse it gets." But then Zander assures us that his baby loves to rock and describes where – and where NOT.

"In the morning, in the evening. In the summer, in the winter. In my car, in the night, in an airplane. Not in Russia!" You might recognize the sound and mention of "airplane" while listening to your balalaikas ringing out and keeping your comrade warm.

"Can't Stop it But I'm Gonna Try" is about him leaving her or her leaving him…or him finding out about her and her new boyfriend; maybe all of them. This tune – from 1980 – uses the phrase "long time comin'". Their 2017 CD We're All Alright not only borrows the title phrase from the ending of "Surrender", it also recycles the "long time comin'" phrase from a mere chorus inclusion to a full-fledged song title on the 2017 release.

Yes, a lot of people think I'm weird for picking out things like that, so go ahead and pile on if you'd like.

"World's Greatest Lover"? Yes, same thing here. Think back to one of the first songs for which Tom Petersson did the vocals – "I Know What I Want" (from the immediately previous album Dream Police). "You're the world's greatest lover…" That just struck me as odd as All Shook Up was the last album on which Petersson appeared before he left the band for his solo effort.

It's the same theme here but different verbiage. He's been on the road, and now he's coming home to the world's greatest lover in his word.

"High Priest of Rhythmic Noise" is really odd. It has the really processed robot voice for most of the vocals, a psychotic keyboard running loose in the background, and some extremely cool lyrics.

"If the song don't change the choir won't sing. Won't sing the same song forever." I think here he's talking about the fact that he's just a singer in a mind choir (I hope Nielsen's mind choir has a psychiatrist traveling with them).

"Love Comes A-Tumblin' Down" is supposed to be a tribute of sorts to Bon Scott – the frontman of AC/DC up to the Back In Black album, who had recently died. Cause of death is debated, but the lyrics here claim "Not a pretty picture when the body was found".

"I Love You Honey But I Hate Your Friends" has more of that damned Zander screaming stuff in it. Y'know, I find it terribly odd that some complain about that with Zander, but in some of the Cheap Trick tunes (like this one BIG time!), he'll do a screaming sort of vocal and he sounds like some singers who actually built very successful careers on just that type of vocal. Singers like, oh, say… ROD STEWART!

In fact, "I Love You Honey" is really reminiscent of the Stewart tune "Hot Legs", which came out in 1977 – three years before All Shook Up was released.

She's got even more friends with odd names, and he hates 'em all.

"Go For The Throat (Use Your Own Imagination)" is, I suppose, as opposed to using someone else's imagination.

Nielsen uses the title of the Stranglers tune "(Get A) Grip (On Yourself)" partway through, and then "I do it alone (you just give me idle conversation)." You'll have to decide what it's about.

For the original release, the last track is the Bun E. Carlos-penned tune "Who D'King". Marching band drums, excited marching band and crowd noises in the background, and the repeated lyric "Who d'king of de whole wide world?" Description does not do the song justice. It's actually a pretty toe-tapping l'il ditty.

In 2006, All Shook Up was reissued with five new songs in the lineup.

First up is "Everything Works if You Let It" from the Roadie soundtrack. Back in the days when vinyl was king, the only way I knew of to get this was on a 12" EP. Yes, of course I had it! Now, it's nice to have it included on a CD so you don't have to juggle things just to listen to one tune.

Cheap Trick also released an entry into the 10" "Nu-Disk" sweepstakes. The Nu-Disk was supposed to be the next big thing because it gave the fans something more than was available on just a 7" 45RPM single, but didn't cost as much as a full 12" LP. At one point as a rabid vinyl collector, I had about 30 different Nu-Disks. But that's all I could find. They never took off like they were supposed to. Of course the arrival of the CD didn't help the 10" marketing maneuver very much, either.

But Cheap Trick and their 1980 release Found All The Parts was a part of my near-10,000 LP collection at one time. It had only four tracks; two slower tunes, one remake, and one that sounded like it might have been a remake.

The live, shorter version of The Beatles' "Day Tripper" appears on Found All The Parts. It's very good, and it's the live version, but it's only 3:41 long. Some of us Cheap Trick purists like the lengthier take better.

"Can't Hold On" is up next. I'm trapped in a conundrum here. One of my all-time favorite bands is, was, and probably always will be Cheap Trick – and that's stood since 1977. From their Nu-Disk, I like one song, sorta like one, and kinda dislike the remaining two. No idea why, but here's the ranking:

I already mentioned that I enjoy their remake of "Day Tripper", so that surprise was spoiled.

I don't care for "Can't Hold On". It's not really bad. It's kinda of a foray into the blues, it's a live track, and you can tell it's Cheap Trick. It's just not a style for which I particularly care.

The fourth track from the Found All The Parts Nu-Disk, "Take Me I'm Yours", is in similar dire straits. Definitely Cheap Trick and definitely talented, but I don't care for the style.

"Such A Good Girl" rounds out the release (actually as track number three), and it's a good tune and very much a Beatle-esque effort.

No, I'm sorry. I wish I could come up with a shorter and less annoying way to reference a Beatles similarity, but I can't. Trust me. I've tried!

If you're interested in adding All Shook Up to your collection, be sure to look for the reissue. That way, you'll kill three birds with one stone: the album, the EP from the Roadie soundtrack, and the Nu-Disk.