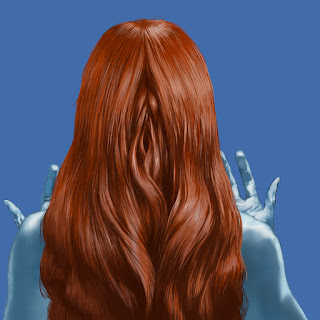 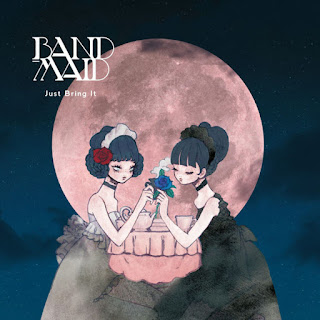 Not exactly sure what's going on here. It's a bit confusing. Even though I've previously proclaimed a growing love for French rock bands (in addition to my existing affection for Australian and Canadian rock bands), three of the last five CDs I've purchased don't have English vocals.

To be fair, one of the CDs is by Hawkwind (Warrior on the Edge of Time – purchased because it has the last tune Lemmy wrote for the band and where his later band's name came from: Motörhead). So that might be in a foreign language, but no one can really tell for sure.

Well, it's actually four of the last six CDs I've bought if you count the Mireille Mathieu Chante Piaf CD that I bought just for background to an upcoming Sparks piece (already in progress).

Good idea! This surprised me quite a bit for two reasons. First, it seems at first blush that the music is kind of dance/trance. Something about the samples on Amazon.com convinced me to look a bit deeper into the band. And the more I listened, the less I could resist.

The music is described as synthetic and hypnotic on their page at Wikipedia. OK! I wasn't far off with the dance/trance thing, right?

Maybe. Maybe not. That page goes on to list their influences as the Velvet Underground (always been something of a Lou Reed fan), Kraftwerk (loved Autobahn years ago), and a mixture of coldwave, punk, and yéyé. Elsewhere they're described as "French psychedelic rock group La Femme".

GREAT! I just figured out what shoegaze was. Now they spring two more genres on me without even asking. For anyone unfamiliar with coldwave and yéyé (as was I): coldwave is further explained as post-punk, and yéyé is a poppish category with similarities drawn to Beatlesque tunes and their "Yeah, yeah" leanings.

I ordered the MP3 version of the CDs – for two reasons, actually. I'm running out of room on my CD rack, which is about 6' by 6' of CDs. That's after removing all of my various artist collections to make room for all of my other CDs. Next, I'm cheap. I wasn't sure that I'd like them enough to make room in the collection for them.

"Où va le monde" is the third track from Mystère (Translates to "Where the world goes"). This track, as well as other spots through both releases, sounds almost psych/surf. Some is near dance-type music. Much is rock or pop-ish.

All of it is good. No matter what genre, the lyrics are sung in French. And there are male and female vocalists. I've discovered that I have a much easier time listening to females singing/speaking in French. Perhaps that's due in large part to a brief interlude about 2:11 into "The Funky Western Civilization" from the Life in the Foodchain release by artist Tonio K. See if you can catch it here:

The Tonio K. reference above is a bonus "best music you've never heard" tip provided absolutely gratis! I would heartily encourage you to listen to several of the other tunes you'll find on that page. You may have never heard of Tonio K., but if you remember the tune "Nobody Lives Without Love" from the Batman Forever soundtrack, Tonio K. is credited on that track. He's also written songs that have been recorded by Al Green, Aaron Neville, Burt Bacharach, Bonnie Raitt, Chicago, Wynonna Judd, Vanessa Williams, and many others.

Finally, my last shameless plug for Mr. K. – He is good friends with Charlie Sexton and has co-written several songs WITH Sexton as well as several songs FOR Sexton releases. Sexton occasionally refers to "…my close friend, Tonio K…." during live performances.

Back to the original topic. For a better idea of the band La Femme, here are videos of a couple of my favorite tracks so far:


The rating of "favorite tracks so far" is, of course, subject to rapid and frequent change without notice.

Be advised that you may find the videos odd. I found them interesting. I know it doesn't hurt that I'm also enjoying the music. But watching a non-cookie-cutter music video is refreshing any way you look at it.

On to the next CD release with mostly non-English lyrics. The title is Brand New Maid by the Japanese band Band-Maid. I've mentioned repeatedly that I have a proclivity for paying attention to female bands or female led bands. I think I do so for similar reasons that I've developed an affinity for Canadian, Australian, and now French bands.

As for the female/female-fronted bands, I  think it has to do with the respect I feel they're due for sticking with it long enough to overcome the obstacles thrown in their paths. I have to admit, the CD cover is an attention-getter as well: 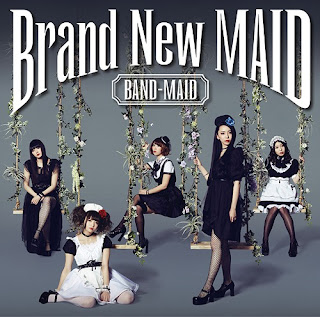 From the opening track of the CD, I was impressed. Actually, from the 30-second snippets provided by Amazon.com, I was impressed. Once I had the CD, I started to enjoy it quite a bit. In fact, I liked it enough that I tracked down and bought another of their CDs – Just Bring It.

Several things leap to mind. As a bass player, please allow me to say that I HATE THEIR BASS PLAYER! The girl plays a five-string bass better and with more imagination than I play a four-string! The drummer has to have calves and thighs like a linebacker with all of the bass drum work she does.

As you'll see in the videos, they're all more than at home in front of an excited crowd, and the lead singer knows how to get the most out of them.

Some folks might claim that "…we've heard it all before". I don't think that's the case at all. However, even if it does sound a bit like this band and maybe a little like that one (there are times, for the record, they remind me something of a young Iron Maiden), that's not a disqualifier. There's even one song (honest to goodness) that sounds like a metal version of a rock tune a band I was with in the mid-'80s wrote.

OK, yes, it's a heavier and more talented version with Japanese lyrics, but the second track on the CD – "Look At Me" – sounds a bit like what we did years ago with our song "Barn Burner". Yeah, there are more tempo changes than we had as well. Sue me.

Check a few of the videos of the band and see if you agree. I think you'll enjoy it – the music is good, they include an English lyric sheet in the CD, and they just look like they're having a blast being a band.


The band consists of the same five members who started in 2013. There have been a few songs released. As far as CD releases, Brand New Maid is the second release of 2017. The first, back in January of this year, was titled Just Bring It.

Here's the first track from the Just Bring It release titled "Don't You Tell Me".

I've heard that there's also a DVD in existence, and I can't help but think that would be interesting to say the least.

The five members, as near as I can guesstimate, are in the area of 20 or so years of age. Interestingly, the members knew each other through the "six degrees" concept. The singer knew the guitarist, who knew a drummer, who had been in a band with the bassist, and so on.

If you'd like, you should have an opportunity to see them live. March of 2016 saw them perform in their first ever U.S. concert in Seattle, Washington. Later that year (November), they embarked on a tour that took them through Mexico, parts of Europe, and Hong Kong, China, before returning to Japan to finish. It looks like their plans include expanding their touring territory.

What a great post, Mike. I also love that French interlude in Funky Western Civilization, and I love those first two Tonio K. albums about as much as anything I play. Can't get into his 80s work though, as so much of it sounds *so* 80s! And I pretty much lost the thread there. But those first two can't be beat.

Also a big fan of French bands, and female-led bands in general. Some others you should check out if you don't already know them:

Thanks for the comments! I will check those other bands out - already vaguely familiar with Mitsouko. There are a few other Japanese female bands I find interesting, as well. I recently picked up Doll$Boxx. Pretty cool. Much of THAT is reminiscent of the 'soundtracks' from the old classic Nintendo games like Friday the 13th, Castlevania, etc. set to a metal beat.

Thanks, again, for the comments and the suggestions!