The Shang Hi Los - Kick It Like A Wicked Bad Habit 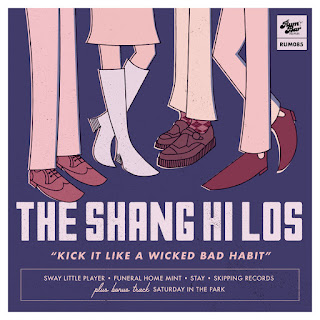 Boston's The Shang Hi Los were without question my favorite new band of 2020. Needless to say, the band's debut EP was poised to be one of my most highly-anticipated releases of 2021. The good news was that I didn't have to wait very long. Kick It Like A Wicked Bad Habit is out today on your home of the hits, Rum Bar Records! The even better news is that The Shang Hi Los have not disappointed on their first extended play release. Kick It Like A Wicked Bad Habit is a most-own for any fan of rock and roll steeped in harmonies and pop melody!

To recap: The Shang Hi Los were formed back in 2019 by a couple of my favorite voices and songwriters. Jen D'Angora (Jenny Dee & The Deelinquents, The Dents, The Downbeat 5) and Dan Kopko (Watts) have been featured on this blog many times in the past. As collaborating songwriters, they've created a band that touches on their shared and combined influences. Thus The Shang Hi Los bring together the best elements of the last six decades of rock and roll. Particular inspirations are '60s girl groups, '70s glam and classic rock, '80s new wave, and '90s indie/alternative rock. The band is rounded out by a couple of all-stars from the Boston scene: bassist Lee Harrington (The Neighborhoods) and Boston's "drummer about town" Chuck Ferreira (Eddie Japan, Lonely Leesa & The Lost Cowboys). While sometimes "super groups" sound better on paper than they actually do on record, The Shang Hi Los are an example of a dream team that truly clicks. Kick It Like A Wicked Bad Habit highlights the talents of D'Angora and Kopko both individually and as a duo. "Stay" sounds like it could have been a Jenny Dee song, and "Skipping Records" could pass for a Watts tune. But on "Sway Little Player", "Funeral Home Mint", and an amazing cover of "Saturday In the Park", D'Angora and Kopko merge both their voices and their musical identities. I've already said plenty about "Sway Little Player", my pick for the #1 single of last year. The rest of the EP proves to be just as good. "Stay", masterfully produced by the incomparable Ed Valauskas, is an absolutely beautiful pop song that mixes old school Blondie vibes with a modern rock aesthetic. "Skipping Records", the second single from the EP, is a feelgood rocker that will have you up from your desk chair and dancing around the house in no time flat (I have this mental image of Malibu Lou hearing this song for the first time and totally flipping out!). "Funeral Home Mint" is new wave rock that actually rocks (that guitar solo is everything!). And to cap off the EP, that "Saturday In the Park" cover is nothing short of magical! It's spiritually faithful to the original and could not sound more "'70s". Yet it's also injected with the essence of The Shang Hi Los. The mixing work on this track by Dan Kopko & Pat DiCenso is top notch.

My only criticism of Kick It Like A Wicked Bad Habit is not a criticism at all: it left me wanting more! Five songs from The Shang Hi Los is just not enough! Kudos to this band for getting this debut made during a pandemic. It took some coordination with tracks being recorded at four different studios, but it all came together swimmingly. I will cross my fingers for a debut album next year, and let's all hope for a time when The Shang Hi Los can get up and play these rockin' tunes in front of people who will be dancing and singing along! If you love rock and roll, you need some Shang Hi Los in your life.