Goin' Places - Better Things To Do 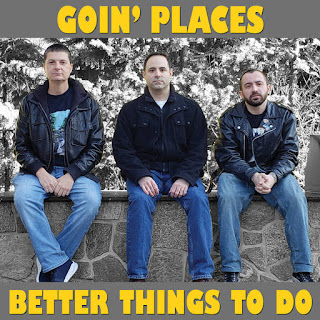 As I've reflected on why there are some pop-punk bands I love and others that do absolutely nothing for me, I've become increasingly aware that my favorite pop-punk bands are usually the ones that infuse the formula with bubblegum and '50s rock and roll influences. Pop-punk, when it's done right, is one of our purest forms of rock and roll. So when Staten Island's Goin' Places sing about "saving the world with rock n roll", I'm totally feeling it! Goin' Places have always been upfront about their love for The Queers, Green Day, Mr. T. Experience, etc. But in terms of songwriting and vocal influence, they take just as much from the Beatles and Buddy Holly. The band's 2002 album Girl Songwriting 101 is a modern classic of pop-punk. The follow-up Relationship Sneakers arrived a decade later. Later this year, the band will release its third album Save The World. New 7" Better Things To Do, out now on Mom's Basement Records, features the title track to the new album along with a pair of exclusive songs. Aside from the fact that none of these songs are about girls, this is a vintage Goin' Places release. It falls into that bubblegum/rock and roll side of '90s-style pop-punk, with Richie and Victor trading off on lead vocals. "Save the World" is all about how music can bring people together in a world too often marred by hate and general crappiness. Now that's a cause I can wholeheartedly endorse! "Better Things To Do" is a tongue-in-cheek number about the frustrations of busting your ass to make music that no one seems to care about. A lot of you will surely relate! "Instru Mental", as you may have surmised, is an instrumental. You don't hear a lot of pop-punk instrumentals, but I really like this one!

I'm stoked for the upcoming release of Save The World. Goin' Places is my kind of pop-punk band. You know who the primary influences are, but the songs also reflect a deeper appreciation for classic pop traditions going back to the '50s and '60s. And you always get the sense that these dudes would be fun to hang out with. When I think about some of my favorite pop-punk bands of recent years (Neon Bone, Jagger Holly, The Putz), I consider Goin' Places to be one of the forerunners to that whole scene. It's great to have 'em back!