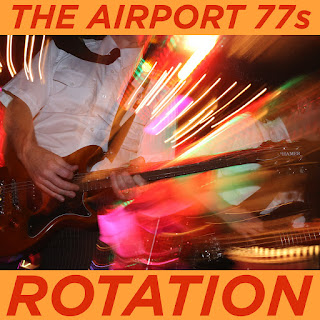 The Airport 77s had me with the mere mention that they formed over a shared love of The Jags' "Back of My Hand" and 20/20's "Nuclear Boy"! This trio comprised of Chuck Dolan (bass), Andy Sullivan (guitar), and John Kelly (drums) is based out of the D.C. area and just released its debut album Rotation on the first day of this new year. Unsurprisingly, Rotation is an album steeped in classic power pop. But what I appreciate about The Airport 77s is that their clever humor and eagerness to rock out provide a refreshing twist on this musical style. The influences are discernible, but Rotation doesn't come off like an album I've heard a thousand times before. This is a band that brings not just great hooks, but also a lot of personality.

The 1-2 punch that opens Rotation is particularly impressive. Both tracks demonstrate this band's knack for building songs around humorous yet fully relatable concepts. "Christine's Coming Over" is about a guy who ponders cleaning up his house - and perhaps his entire life - in advance of a big date. "(When You're Kissing On Me Do You Think Of) James McAvoy" is pretty self-explanatory. With a title like that, the song had a lot to live up to. But it does not disappoint. Who among us has not pondered the possibility that our significant others would leave us for a dashing actor - and perhaps even sink to the depths of embracing creme brulee and Coldplay? Off to such a formidable start, Rotation continues to please in numerous ways. "Shannon Speaks", which tells the story of a "mysterious, unconscious visitor who might provide the skeleton key to the modern era", sounds like something off of the Valley Girl soundtrack. "Wild Love" is full-on Cheap Trick worship executed to arena-rocking perfection. "All The Way", a tale of a summer romance culminating in the back seat, is accurately described as "the Raspberries meets .38 Special". "Bad Mom!" savagely spoofs the high drama of the modern-day PTA/soccer mom scene. "Girl Of My Dreams" is a wonderfully faithful cover of the Bram Tchaikovsky classic - a song that so fascinated drummer John Kelly that he once flew to England to interview its author Ronnie Thomas.

It would be impossible for me to not like a band that aspires to write original material good enough to follow "Jessie's Girl" in its live set. And of course I quickly identified The Airport 77s as kindred spirits who like me have invested countless hours of their lives perusing musty stacks of vinyl in search of Artful Dodger LPs. But what I really admire is how this band takes that late '70s/early '80s power pop influence in its own unique direction. Rotation strikes a perfect balance between songs that make me laugh and songs that embrace the visceral horniness of the arena rock of yore. If the best power pop is always fundamentally rock and roll, then The Airport 77s pass the test for sure. You know I never like to go too far into a year without identifying an early album of the year contender. So I'll slide Rotation into my #1 spot and make it the one to beat. Hands down, the best album of the past 14 days!