Dany Laj and the Looks - Everything New Is New Again 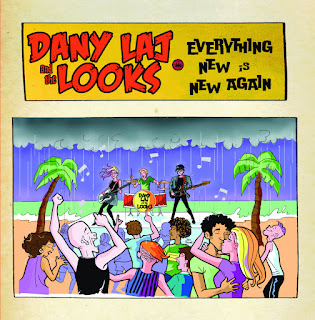 It may be true that you can't judge an album by its cover. But the cover of the new album by Dany Laj and the Looks sure tells you an awful lot. The new record is a six-song effort titled Everything New Is New Again. Dan Parent (yes, THE Dan Parent!) did the cover art, which would totally make you want to buy the album even if you didn't already know that Dany Laj and the Looks were the best! Dig that scene: you've got people dancing and romancing and having the absolute best time while the band joyfully rocks out on stage. Talk about fun city! Many of you who've seen the band will surely attest to the authenticity of that image.

Dany Laj, the Montreal-based (by way of northern Ontario) songwriter, describes his music quite simply as "pure pop". I would say that's very accurate, and you know that's something I can wholeheartedly endorse. He and his band mates Jeanette Dowling (bass) and Victor Tremblay-Desrosiers (drums) recorded Everything New Is New Again last year at NY Hed Studios in New York with Rocio & Matt Verta-Ray (who also played on several tracks). For some reason, I'm getting a real 1980s feel from this record. The style is that straight-forward rock and roll with melody-driven songwriting that we've come to expect from Laj and friends. There aren't a whole lot of bands that do it better. Laj knows how to turn out a memorable riff ("Hold For Love") or hooky chorus ("Annie") that can totally make a song. The sweet spot Laj and his band hit here falls somewhere in between Tom Petty and mid-'80s Replacements. With its creative guitar lines and cool keyboards, the verhy catchy "My Head" brings to mind that moment in time when new wave pop-rock was king. It's probably not fair to hold Laj and co. to the standard of "Left To Right One" or "Mister Screaming Attitude" every time out. But honestly, there are several songs on this album at that same level. For my money, this is Laj's strongest and most consistent set of songs to date. And since I'm always a fan of a good "deep cut", I must commend the nearly six-minute closer "Small Town Miner". This is a song that's very meaningful to Laj - who comes from a small mining town. It shines a light on the struggle of unprotected miners - who have worked hard all of their lives to provide for their families but could still lose everything at any moment. It's a powerful song and performance and definitely one of the best things Laj has ever written.

In support of Everything New Is New Again, Dany Laj and the Looks have been touring North America since last month and will continue to do so through next month at least (Hopefully the Habs will be comfortably in first place by the time they wrap up). The next two weeks alone, the band is making its way through the great American Midwest. You can find the tour dates over at the band's web site. LP is available from Yeah Right! Records. Transistor 66 has the CD and digital release of the album - which tack on French language versions of "Annie" and "My Head"! This is pure pop indeed, and ya gotta love it!

Anything Should Happen said...