Baby Shakes - Cause A Scene 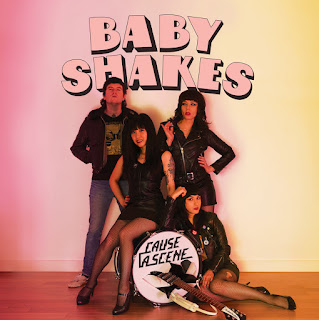 It's certainly very rare for a band to make its best album 15 years into its existence. But Baby Shakes have gone and done just that! Cause A Scene is the New York foursome's third LP since 2015 and fourth overall. It's crazy to think that I first reviewed this band was way back in 2005. At the time, I'm not sure I could have even foreseen that Baby Shakes would still be around in 2019. I mean, how many bands actually last 15 years? How many last even 10? And not only are Baby Shakes still around in 2019, they are also at the very top of their game. If I could recommend just one Baby Shakes album that best represents what this band is all about, Cause A Scene would be the one without a doubt. It's pretty close to a perfect record from one of the defining punk/power pop bands of its time.

Released on the band's own label Lil' Chewy Records, Cause A Scene is immediately recognizable as a Baby Shakes record. The upbeat rocker "Nowhere Fast" kicks off the album with a perfect shot of the band's signature punky rock and roll. It'll have you tapping your toes and bobbing your head in no time. The smash hit title track (my god, that hook!) and "Cruisin'" follow in a similar vein. With its hand-claps, red-hot lead guitar, and bubbly harmonies, the latter is the quintessential Baby Shakes song. If this band ever stopped doing songs like this, that would be a total bummer. But what I love about this record is that it stretches well beyond the group's core sound. The gorgeous, Beatles-inspired "Wasurenai Wa" and wistful Angels cover "Am I Ever Gonna See Your Face Again" ought to have power pop fans standing to applaud. "Down" and "Love Song In Reverse" find the band rocking harder than it ever has before. "Modern Girl Renegade" is beachy and '60s-inspired in a way that brings to mind early Go-Go's. And in closing track "Let's Go, JetGlo", Baby Shakes have launched a glam rock anthem into outer space!

After not recording for several years, Baby Shakes have been absolutely on fire since their 2015 comeback. And with every new release, they just seem to get better. If you've ever pigeonholed Baby Shakes as a "singles band", Cause a Scene just might lead you to change your mind. I'm struggling to find a track on this thing that isn't totally spectacular. And whether you favor the power pop, punk, or glam side of Baby Shakes, this record has got you covered. Vinyl available here!

Yeeeeesssssss a great Album !!!, thank's for the review Johh !!!.