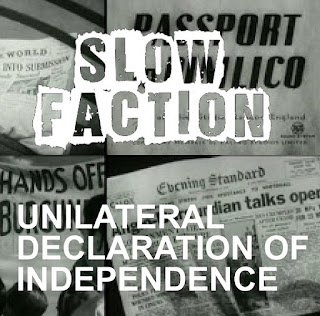 Slow Faction has a new album out, so of course you can presume it's full of songs about pretty girls and celebrity gossip. Just kidding. The London foursome is more politically-charged than ever on its third long player, firing up anthems left and right in the timeless Clash/SLF/Angelic Upstarts mold. In the two years that have passed since the release of Under Heavy Manners, we have fallen even deeper into this modern-day twilight zone where heads of state normalize white supremacy and anti-fascism is suddenly an "extreme" position. Slow Faction are not about to stand silent, and they've responded with a full album of thundering statement songs. The musical style has not changed, and why would you want it to? This is '77-style British punk the way it ought to be - coming on with impassioned force and huge sing-along choruses. Of course a song like "Breitbart Boys" could not be any more on-point. But on this record, Slow Faction are less concerned with extremists than they are with those who enable them due to either apathy or political convenience. "You make a stand or you stand for nothing," cries lead singer John Youens on "The Blank Generations". And that is more or less the theme of this entire album. These songs ask us all to take a look in the mirror and ponder our own complicity in all of this madness. Elsewhere, the band explores the ways that governments have failed the people they are entrusted to govern. "And Never Said A Word" powerfully depicts the human price of politicians' war-mongering. "U.D.I." is specifically about the failures of the U.K government, yet its description of a nation in despair rings painfully true on my side of the pond as well:

Clearly, Slow Faction is not a band that's "mellowing" with age. They're writing quality punk songs, and they're doing so with purpose. I get that politically-minded bands are not for everyone. But my belief is that all people who write songs should write about what they are passionate about. Slow Faction's passion is fighting for social justice and against fascism. Sure: a thorough reading of this album's lyrics is not the most pleasant experience (closing track "No Country For The Young" is a particularly bitter pill to swallow). But isn't that the whole point? Unilateral Declaration Of Independence is the work of a band that would like to change the world. Can individuals or bands actually change the world? Who knows? But it's when they stop believing they can that all hope is lost. Give 'em hell, boys!