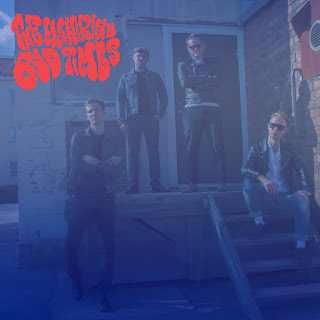 Hey, look who it is! I presumed The Manikins were long broken up, but apparently they were just "taking a break"...for nine years! I will always associate this band with the heyday of mid-2000s garage punk and power pop. They released three albums and several singles on the late, great P. Trash Records and also worked with everyone from Ken Rock to Rockin' Bones to Plastic Idol to FDH Records. Well here they are in 2019 with their first new music in a decade, and it's like they never left. New album Bad Times has been co-released by FDH, Secret Identity, No Front Teeth, and Resurrection records. As expected, this sounds like a Manikins record!

The Manikins explore a number of musical styles on this release, so there's definitely evidence of the growth you'd expect from guys who are now a decade older. "Make A Run For It", one of the album's strongest tracks, is on the soulful end of garage rock a la Reigning Sound. "It's A Drag (Isn't It?)" is old school blues rock right down the Stones/Animals/Pretty Things lane. The title track flirts with the darker melodic punk sound that is so closely associated with the band's native Sweden. There's even an old western influence on closing track "Bank Robbery". But as you would hope from a Manikins record, this thing is chock full of garage punk rippers, power pop hits, and a few songs that are a little bit of both. "Worse Than I" and "It's Not Gonna Be Ok" are classic Manikins all the way. "On The Hanger To Dry" is a straight-up punk smasher that has me feeling like the 2000s never ended. "Everything Is Shit (Without You)" and "Can't Hold On" are great straight-ahead punk rock and roll songs that sound just as good today as they would have 15 years ago. I can hear a little King Louie/Exploding Hearts influence in "Keep On Waitin'" - a wonderfully bittersweet number that builds to a killer chorus.

If you dig garage punk and power pop (yeah, I know: that's basically everyone who follows this blog!), Bad Times is a record you'll want to own. For those of you who were Manikins fans back in the day, you'll find this to be as good as any of their albums. And if this is your introduction to The Manikins, you've got a lot of great music to get caught up with! The band's songwriting chops have never been sharper, and the group sounds like it's come back from hiatus with a renewed energy. There's more than enough musical variety here to keep things interesting. Ultimately, though, this is still the garage punk power pop party record you would have hoped for. This is how you come back!

Amazing comeback album! Greatness all the way through.