Geoff Palmer - Pulling Out All The Stops 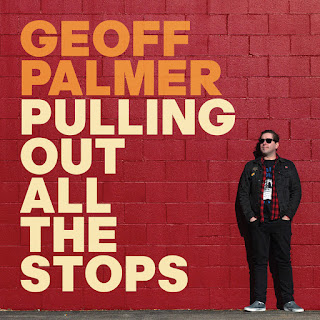 I believe we've found our album of the summer! If you're like me, you heard all of Geoff Palmer's digital singles last year and thought, "Damn, these songs are WAY too good to not be on an actual record!". Well, a couple of pretty swell label guys were thinking the exact same thing. And in relatively short order, Geoff Palmer's solo debut album has been willed into existence. Out today on Stardumb Records in Europe and Rum Bar Records in the U.S.A., Pulling Out All The Stops is the pop-punk album for people who usually only listen to power pop. Or is it the power pop album for people who usually only listen to pop-punk? Either way, it's one of the best albums we'll hear this year. This all started out as a fun project for The Connection singer/guitarist Palmer. He wrote some solo songs and recorded them with pals like Brad Marino, Adam Cargin, Craig Sala, and B-Face. For good measure, he set out to cover songs by everyone from The Invalids to The Vapids to Gino and the Goons. Once these tracks started hitting the old Internet, even Palmer's biggest fans were blown away by how good they were. We all had to wonder why Palmer had taken so long to reveal his magnificent solo artistry to the world!

If Pulling Out All The Stops had just been a vinyl pressing of Palmer's digital singles, nobody would have complained. But Palmer took it a step further. Pulling Out All The Stops of course features smash hits such as "This One's Gonna Be Hot" and "Velcro Shoes". But even if you already heard all of the singles, a lot of the songs on this album will be new to you. 8 of 14 tracks are previously unreleased. We got a little taste of the new songs thanks to recent videos for "Giving In" and "All The Hits". The former is a big, slick power pop number that brings to mind Palmer's pal Kurt Baker. The latter finds Palmer digging deep into his pop-punk roots and goofing on classic bands that load their live sets with the dreaded "new material". The rest of the new songs are of the same caliber and run the gamut from punky power pop ("Cha-Ching") to kick-ass Ramonesy punk ("Everything Is Cool") to British Invasion/'60s pop goodness (the Michael Chaney co-write "Paper Heart") to pop-rock worthy of late '70s/early '80s radio ("Make It"). This might seem like a weird thing to say about the guy who co-fronts the best damn rock n' roll band on Earth. But this album demonstrates to me that Geoff Palmer is an immensely underrated songwriter! As much as I've praised his bands over the years, I don't think I've ever given him enough credit. He just has a knack for writing really great pop songs, and he has a particular flair for lyrics that are both funny as hell and totally on-point. If the likes of "Velcro Shoes" and "I Like Murder Too" have you chuckling because they hit a little too close to home, I can assure you that you're not alone!

In a day and age of pronounced divisions between the pop-punk, garage, and power pop camps, Geoff Palmer has delivered an album that makes all of that seem really stupid. Of course the pop-punk faithful will go totally nuts for these songs. But I bet Little Steven heard "Paper Heart" and cried tears of joy. I really dig the idea of an album where covers of Sinkhole and Gino and the Goons fit in equally well! While Palmer wears his Ramones/Queers/Beach Boys loving heart on his sleeve, he also draws inspiration from just about every great era of rock n' roll. Even if you usually hate pop-punk, this could be the album that turns you to the dark side. Download is just four bucks via Bandcamp. Vinyl and CD are available from the fine establishments linked below!