The Sweet Things - In Borrowed Shoes, On Borrowed Time 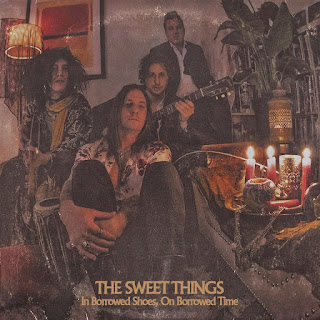 Holy crap! After waiting four years for New York's Sweet Things to put out a full-length debut, I expected a really great album. But I don't know if I was quite anticipating this! Out today on Wendigo Productions NYC and Spaghetty Town Records, In Borrowed Shoes, On Borrowed Time absolutely blew me away upon first contact and has only gotten better with subsequent listens. Ladies and gentlemen, The Sweet Things have made themselves a goddamn masterpiece!

Spiritually, you could say In Borrowed Shoes is The Sweet Things' Exile On Main St. It runs the stylistic gamut from trashy rock n' roll to blues to country to soulful ballads - striking a perfect balance between Saturday night debauchery and Sunday morning regret. The band really pulled out all of the stops to make this a grand-sounding affair. Session players include Rob Clores (Black Crowes, Jesse Malin) on piano and keyboards, members of the Uptown Horns (James Brown, Rolling Stones) on horns and sax, Brian Hurd (Daddy Long Legs) on harmonica, and Liza Colby & Alejandro Escovedo on backing vocals. Yet the heart of this album is an amazing set of songs and tremendous performances by the members of this band (Dave Tierney on vocals and guitar, Lorne Berhman on guitar, Sam Hariss on bass, and Darren Fried on drums). Tierney, in my book, is one of the finest singers in today's rock n' roll. Much of the ragged, boozy spirit of the band's music emanates from his raspy pipes. And at an even deeper level, his vocals are full of heart and soul and a character that I find rare.

Certainly this album raises a bottle to '70s Stones and Johnny Thunders. But The Sweet Things definitely have their own sound which they've been honing for quite a few years now. I love that "Liquor Lightning" comes on like a drunken mess, takes a somewhat bizarre turn, then explodes into a sing-along party for the ages. And that guitar solo: wow! If you like good, straight-forward Stonesy rock n' roll, "Dead Or Worse" and "Almost Faded" will not fail to satisfy. Elsewhere, the band delivers stunning country rock gospel soul on the title track, an absolutely ripping rocker in the wonderfully over-the-top "Coke'n", sloppy Thunders-inspired brilliance in "Fix To Kick", and a true grand finale in the heartfelt ballad "Feed My Dog". The absolute highlight for me, though, is the band's new version of "Through the Cracks of the City". I didn't think there was anything wrong with the old version - until I heard the new one! These guys really worked out how to take a killer song and make it even better. From the vocals to the lead guitar work to the chorus, this song is the essence of sleazy rock n' roll!

Dave Tierney had a very interesting quote when he was asked about the process of making In Borrowed Shoes. "I like listening to music," he said. "But sometimes when I'm listening to an album, I think, 'Wow this is cool, but it'd be even cooler if it was better.' So we decided we would do that, make an album but make it better." That seems like such an obvious approach, but clearly The Sweet Things worked very closely with producer Matt Chiaravalle (Debbie Harry, Warren Zevon) to get everything about this album 100 percent to their satisfaction. And the results are stunning. I can go back to the previous singles and hear a really good band - one with the potential to be great. In Borrowed Shoes, On Borrowed Time, on the other hand, is the work of a truly exceptional rock n' roll band firing on all cylinders. The legacy of great bands from New York City is a rich one, and The Sweet Things have put themselves in that conversation. My friends in the U.K. can catch them on tour in just over a week!

Listening to these dudes on Spotify after checking out this review. This album smokes. Ordering it right now.

Amazing. Rock record of the year.