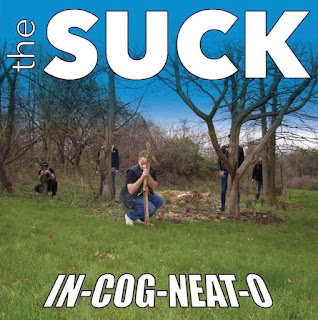 You all have had your little taste of street rock. Are you finally ready for the main course? You better be! I've been teasing/promising/threatening the arrival of a full-length debut from the SUCK for a while now, and finally the wait is (almost) over. In-Cog-Neat-O is up for pre-order today over at the magnificent Moms Basement Records. I gotta tell you that this thing is gonna have smoke coming out of your ears! Lean and mean at eight tracks with only two of 'em daring to eclipse the mostly forbidden two-minute mark, In-Cog-Neat-O brings on the next phase of street rock - the one that will bring hope to humanity and have young and old alike pledging allegiance. While by all means inspired by/allied with the HEAD/NECK/Vapids axis of Ramones worship, the SUCK very much has its own thing going. Packing such explosive power that its membership had to be spread across three contiguous states, this gang really brings the rock on this debut long player. For real: these dudes aren't afraid to make a punk record that actually sounds good! Those guitars pack a mega-punch, and you'll swear they enlisted an army to record some of those backing vocals. And while this album obviously owes a great deal to the Ramones and pop-punk, it also earns high marks in the originality/uniqueness department. Given that my stance on humor is "the darker, the better", the SUCK and I are definitely on the same wavelength. The closest thing to a "love song" on this record is about a guy who gets catfished. "#youredead" is a feelgood hit about threatening murder over social media. "Death Machine" is literally about building a contraption for killing people. "The Vape Store" concerns the plight of unemployed grown men who hit on teen girls. These songs are so very wrong - yet somehow so right! Elsewhere the band addresses some of the burning topics of our time: Mexican bogeymen, the ruthlessly competitive sport of flip cup, and the tangled web of love interests complicating the plot of the Twilight franchise.

Coming off a massively acclaimed self-titled EP and the instant classic web single "Party Town, USA", the SUCK had the pop-punk and Ramones-loving communities pumped for an absolute ripper of a debut album. I am confident in guaranteeing that nobody is going to be disappointed! The SUCK has come out and crushed this one. You've got The Dunk and The Alien cranking up the guitar thunder, The Basement knocking the snot out of his drums, The Problem laying it down like Dee Dee, and The Cola bringing a voice to this band's unique sense of humor and unwavering pursuit of fun. And as for the short running time...that just gives you more chances in a day to listen to the album! While leaving little doubt about its influences, In-Cog-Neat-O finds the SUCK carving out plenty of territory for itself. It's a little bit Ramonescore, a little bit party punk, a little bit pop-punk, and a whole lot of street rock! Your prayers have finally been answered. East Coast, represent!