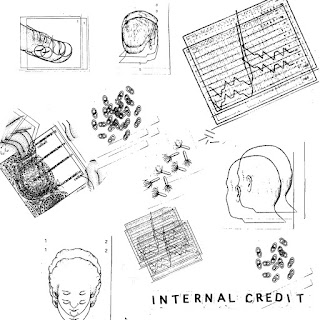 My New Year's resolution to write about more new bands is not so challenging when I come across music this good! Internal Credit is about as new as it gets. From what I can gather, this digital EP Internally Credited is the band's first release. This is some truly great punk stuff from Falmouth, UK! Charlie Murphy, one of my favorite people in music, is part of the lineup. But the rest of the band was already playing together before he joined, so you won't want to classify this as another "Charlie project". The full lineup is Rob Camp on bass, Jo House on drums, Morgan Mathews on guitar/vocals, and Charlie on guitar/vocals. I would describe Internal Credit as garage punk with the emphasis on punk. I just love the rawness and energy of these six tracks. For the most part, the band plays fast and furiously, with absolutely tremendous enthusiasm. I wouldn't call this "pop" punk, but all of these songs are quite tuneful and seemingly crafted for the purpose of singing along. Songs like "Paint Flakes" and "Other Ways" barrel along with a hardcore urgency and just might leave you catching your breath. You can hear the old Charlie Murphy influence rearing its head on "Today, Alright" - and that's never a bad thing! "Need To Turn" is definitely "anthemic" punk rock that will have you shouting along at home (or at the gig!). "Grey Photograph", with its chaotically poppy charm, kind of takes me back to the heyday of bands like The Real Losers and Hipshakes.

Internal Credit is the best new punk group I've heard in a good while. After twenty-some years of writing about music, I still get excited hearing punk music stripped down to its essence and played with maximum gusto. Listening to Internally Credited, I can't help envisioning what the band's live performances are like. I imagine kids dancing like crazy, shouting along, and just having a generally wild time. Those of you in southwestern England can find out for yourselves when Internal Credit plays with Youth Avoiders in Bristol on April 18th. Might as well familiarize yourself with the songs now!

Check out the Two Tens from Los Angeles. Saw them last night opening for the Schizophonics (another band you should check out) and the Woggles.