Betty Machete and the Angry Cougars - "Stay In Your Lane" 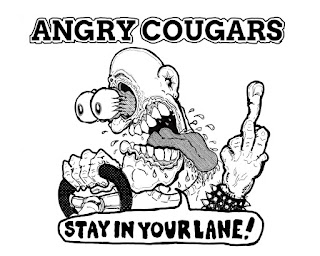 Whew! If you feared that after all of these years, Betty Machete and the Angry Cougars might have mellowed-out a little or settled comfortably into "musical maturity", you can breathe a little easier today. If anything, the passage of time has only deepened the rage and ferocity driving this Ohio outfit's recorded output. It's as if they're siphoning all of the rancor and discontent that's in the air and using it to acquire musical super powers. "Stay In Your Lane" is the Angry Cougars' 7th EP, and it's every bit as fierce and pummeling as the band's first. Ms. Machete still sounds like an individual you do not want to mess with, and behind her the band remains in permanent attack mode. As always, it's tricky to categorize the music beyond calling it loud and aggressive rock n' roll. The title track is a fast and furious Motörhead inspired punk ripper, while "Who Dies First" slows the pace but dials up the heaviness in a big way. "Grudge Match" comes on with thunderous, AC/DC caliber arena riffs, then turns on a dime to blazing and supremely pissed-off hardcore punk. Track four, exclusive to the vinyl, is a cover of Iggy and the Stooges' "I Got A Right" - arguably the first ever punk song.

Believe it, kids: "Stay In Your Lane" kicks ass! It's tremendously satisfying to hear Betty Machete and the Angry Cougars sounding as committed as ever to slaying anything in their path - six years after they unleashed "Book of Hate" on an unsuspecting world. I can't think of another band that hits the spot quite like BMATAC when you're mad as hell and not going to take it anymore. If you're a strictly digital person and have thus far missed out on the wonders of this band, the time for catching up has arrived. Angry Cougars are now on Spotify! Your enemies and friends alike ought to be on notice.