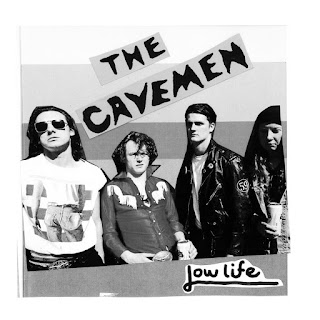 Well here they come again! Last year, The Cavemen dropped one of the fiercest and most delightfully pummeling rock n' roll long players of recent memory with the appropriately-titled Nuke Earth. If these New Zealand neanderthals weren't already recognized as the planet's premier slingers of savage rock n' roll, Nuke Earth certainly settled the matter emphatically. So prolific is this gang that I actually missed out on the subsequently released single "Burn Out For Love". Points off for me! Next up from The Cavemen is "Lowlife" - out today on Slovenly Recordings. The title track was recorded amidst the band's recent raid of Brazil, and it captures this road-tested crew at peak ferocity. Here The Cavemen sound every bit like fellas capable of tearing the roof off of any venue that will have them. "Lowlife" cranks like some unholy hybrid of raunchy rock n' roll and full-on Stooges savagery. The sound is blown-out and positively filthy, with earsplitting guitars not quite overpowering some hopping bass lines while Mr. Paul Caveman screams out his guts per usual. Ya gotta love it! "Baby I'd Do It For You" is actually an outtake from the Nuke Earth sessions, but it sure doesn't sound like a song any band would care to discard. A la the best tracks on the album, this one manages to be fast and furious yet still catchy as fuck. It will have you head-bobbing like a maniac for a solid minute, so prepare accordingly. To finish, "Drownin'" may be this EP's most enticing attraction to longtime fans. It's a song the band recorded back when these guys were still in high school! It's raw as hell and may surprise a lot of people. I'm talking grimy budget rock blues - pretty far from what this band ultimately became! Yet it holds up quite nicely, and I think the Cavemen faithful will be really stoked to hear it. Man, can you imagine what The Cavemen were like in high school?! Sounds like the premise for a movie!

Like always, The Cavemen have come out swinging on "Lowlife". This is just one of several 7-inch records releasing on Slovenly today. But I figured I ought to start with this one since I know it's gonna be a fast mover. You better be a fast mover yourself if you want a copy on purple vinyl!