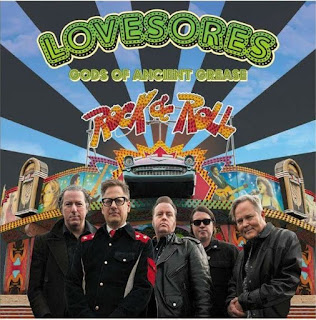 THIS IS HOW YOU DO IT! Following six EPs dating back to 2012, Portland, Oregon's Lovesores finally present their debut LP on Dead Beat Records. I appreciate that there was never a big hurry to get a "proper" album out. Lovesores were hell bent on releasing great rock n' roll records, and it didn't really matter if that meant 7 inches, 10 inches, or 12 inches. At some point you're bringing it so hard that a couple more inches aren't going to make much of a difference. Previous EPs such as Bubblegum Riot (2013) and Rock and Roll Animal (2016) burned as hot as punk rock n' roll gets, and that's the same standard that Gods of Ancient Grease lives up to.

Produced by Portland punk rock legend Thee Slayer Hippy, Gods of Ancient Grease makes little attempt to "progress" or "update" the Lovesores sound. What you're getting here is wild, furious, and 100% from-the-heart rock n' roll steeped in the sleaze and swagger of 1970s American punk. If there's a fountain of youth, Scott "Deluxe" Drake drinks from it copiously on a daily basis. The charisma and unrepentant fuck-all attitude that ooze from his vocals ought to be the envy of every teenage screamer in the business. And as always, Saul Koll and Adam Kattau bring the fire on dual guitars. Add one of the most underrated rhythm sections going (Alex Fast and Boz Bennes) to the mix, and you've got yourself a world-class rock n' roll band! But I suppose you knew that already! If anything, Gods of Ancient Grease finds the band clinging the closest it ever has to its '77 punk roots. Songs like "Exquisite Kicks", "Planet Nein", and "Blue Suede Collar" are vintage Lovesores - coming on with ripping guitars, locking into a mid-tempo groove, and then socking you in the mouth with a huge sing-along chorus. The title track, quite honestly, is one of the most powerful testaments I've heard to the eternal glory of rock n' roll. And then there's the Dead Boys thievery on "Good Girls Don't Scream", which is blatant and highly appreciated! While none of these eight tracks veer far from what you've come to expect from the Lovesores and Scott Drake, I enjoy the creative songwriting touches shown on both of this album's side-enders. "Wednesday Monkeys", with its overt melody and interesting production techniques, is like a rock epic minus the excess. And appropriately enough, "Mission To Mars" gets a little spacey.

I know that "highly anticipated album" is a phrase guys like me often overuse. But it most certainly applies to Gods of Ancient Grease! I used to say that Loveosres were the greatest existing band without a full-length album. Well now they finally have a full-length album, and it's something else! Would I sound a little overzealous if I proclaimed it an instant classic of punk rock n' roll? Of course! But I dare you to listen to this thing and tell me I'm wrong!

Besides being decent r'n'r that's quite an album cover, there, too.