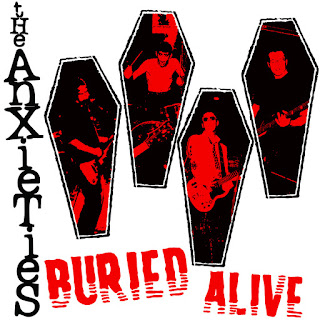 In preparing this review, I was shocked to discover that it has been four and a half years since I've written about The Anxieties! Where does all the time go? I know that real life issues have led to some extensive periods of inactivity for The Anxieties, but I appreciate that they've never thrown in the towel. This band is way too cool to not exist! I'm notoriously lukewarm on horror-themed punk music, but I absolutely love The Anxieties. That's probably because they mix the horror with a whole lot of sci-fi/dystopia - which is way more up my alley.

I recall The Anxieties' Buried Alive EP being in the works a couple years ago, and I am happy to report that those songs have finally seen the light of day. Those tracks have been packaged with the three songs from the Lab Rats EP, the two-song The Quarantine digital release, and one comp cut to make one ten-song CD that plays like a full-length. The four new songs feature the band's most recent lineup, and they sound fantastic. "Destination Dystopia" reminds me of early Anxieties - mixing spazzy poppy punk with old school California punk influences. Listening to the lyrics about how we're well on our way to an actual dystopia, you might think this song is a response to recent current events. But I'm pretty sure this song was written a few years back. That confirms something I've long suspected: The Anxieties are actually from the future! "Buried Alive" is an Adolescents/Agent Orange inspired ripper that cleverly employs a horror metaphor for the hopelessness and desperation of working a miserable job. "I Don't Wanna Go" is the perfect mix of horror and sci-fi, and it's just mysterious enough to let your imagination run wild. Seriously: where are they taking him?! In the best way possible, I am creeped out! Musically, the vibe is straight-ahead catchy punk with killer melodic leads. For the first time, I can hear The Anxieties' channeling their alter egos Jabronis. Or maybe it's more like the Buzzcocks binge watching Black Mirror! Speaking of songs that leave a great deal to the imagination, "Experiments in the Basement" is a very well done surf/punk instrumental. Even with there being no words, it's easy to picture this song appearing in a movie about....experiments in a basement!

Even if you already own all of the remastered bonus tracks, Buried Alive is well worth picking up just for the four new songs. Otherwise, this is kind of like getting a whole new Anxieties album! This is definitely the perfect band for our times: influenced equally by the fun of '50s/'60s B-movies and the not-so-fun of our modern reality. Fingers crossed for more music from these guys soon!

Dude. Thank you so much for your blog and passion for music. You have helped me discover many new bands. Internet helps unknown bands get attention, but there are so many of them to browse through. Long live FASTER AND LOUDER!

The first song is a cover. Bobby Steele’s “I Don’t Wanna Go”