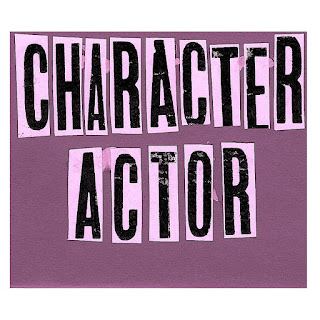 The only thing I love as much as the story behind Character Actor is the New Jersey outfit's actual music. This project began as a creative outlet for three longtime friends who had had all become dads around the same time. It started with Jeff Schroeck (Black Wine/The Ergs!) and Brian Gorsegner (Night Birds) retreating to the garage to "write some loud, fuzzy pop songs". With the addition of Evan Kiel (Forward To Death), Character Actor solidified as a trio. The band's debut EP was recorded in January, and it's out now on Dirt Cult Records. Musically, this could not be any more up my alley. Catchy pop tunes with noisy guitars? Sign me up! Surely Chris from Dirt Cult heard these songs and immediately knew Character Actor had to be on his roster!

Jeff Schroeck wrote these songs, which absolutely bear his style. When you hear his voice and guitar playing, you immediately know who it is. And I can't think of a lyricist who is more clever or literate. His words always blow me away while still leaving lots of room for interpretation. How many other bands have introduced themselves to the world with a line like "We're all warm chairs/To those seeking heat"? Literature and popular culture have always been frequent inspirations for Schroeck's songwriting. That continues to be the case on songs like "What I Learned From Righteous Cowboys"("The tall man, gun with a pearloid handle/He can shoot the flame off a Mexican prayer candle") and "Rubicon Beach" (which does reference the Steve Erickson novel). The tempos are for the most part snappy, although that gets dialed back some on the thoughtful, laid-back "72 Paperbacks". There is pretty much zero chance that fans of Black Wine and Ergs! won't love Character Actor. And it's fun to be reminded that the lead singer of the world's greatest punk band is also a sick drummer! If you long for the 1980s heyday of indie rock and college radio, this is a band that really captures that spirit. Is this what dad rock has become in 2018? If so, I endorse it fully!