The Cheap Cassettes - Kiss The Ass Of My Heart EP 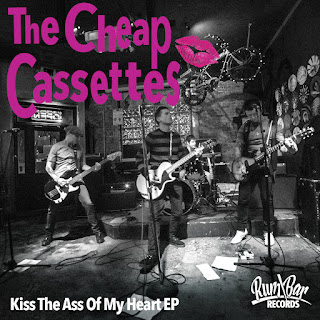 I hereby retract any prior proclamations I may have made about the song of the summer 2018. The Cheap Cassettes, whom I've championed fervently since the infancy of this blog, have unleashed a surefire international smash titled "Kiss The Ass Of My Heart" that's poised to own this summer and perhaps the next couple of seasons as well. Could any song live up to a title that astoundingly great? This one, I'm pleased to say, absolutely does. When popular demand requires The Cheap Cassettes to tour every watering hole and concert hall from Kahului to Khabarovsk, "Kiss The Ass of My Heart" will surely be the band's most requested song on a nightly basis. Even those who don't ordinarily go in for the Seattle foursome's brand of loud, hook-laden pop are bound to find themselves feeling this song. What could be more cathartic than telling off that certain person who brought misery and heartbreak into your life? This is a song you'll want to play at maximum volume while you imagine singing it to your ex. Or perhaps if you're feeling feisty, you can play it at maximum volume while you actually sing it to your ex. I was going to say that this song ought to be all over the radio. But does anyone really listen to the radio anymore? I suppose the true hit songs of today are the ones that make it onto TV ads for Mexican beer and Apple products. A song called "Kiss The Ass Of My Heart" sure sounds like marketing gold to me. That hook could sell everything from lipstick to monogrammed underwear!

"Kiss The Ass Of My Heart" and "Black Leather Angel" come from the same recording sessions that produced The Cheap Cassettes' 2017 debut single "Hieroglyphics In Lipstick". In a genius move, that single was released only on cassette. Now Rum Bar Records has issued all four songs on one stellar EP. This is actually the first vinyl release from The Cheap Cassettes, and it's a perfect representation of what this band is all about. These tracks were recorded at Egg Studios last summer with the legendary Kurt Bloch producing, and as expected they sound freaking amazing! This EP is proof that high quality production does not necessarily have to neuter a rock n' roll band's attack. This, to me, is what all power pop should aspire to be. These songs have melodies and choruses for days, but they don't skimp on big guitars and hard-hitting drums. Of course I had "Kiss The Ass of My Heart" pegged as a hit since I first heard a rough demo a couple years back. "Black Leather Angel" ain't too shabby either. This snappy rocker pretty much perfects the sound Charles and Kevin have been working towards for the last 15 years. It's timeless guitar pop born out of a love for '70s punk and great American rock n' roll. Once you let that chorus worm its way into your brain, good luck getting it out of there!

Having admired Charles Matthews's tremendous talent and consistently superb hair since 1996, I can genuinely say his songwriting has only gotten better with time. The same can be said of his singing voice. His creative partnership with Kevin Parkhurst has brought forth a band that is like the best parts of Material Issue, Cheap Trick, The Figgs, and Replacements all rolled into one. If The Cheap Cassettes are not my clear cut favorite band on Earth, it's only because I can't decide between them and The Connection (I swear Malibu Lou did not pay me to say that, although I will not refuse any shipments of New England IPA). And while I really like the band's full-length, I absolutely love this new EP! In edition to the vinyl release, "Kiss The Ass Of My Heart" is available on tape for all of you who prefer to listen to The Cheap Cassettes on cassette. You can order now from Bandcamp, and locals can pick up the new EP tomorrow night when the band plays a release show at Darrell's Tavern. The Tripwires and Yes Masters will be on the bill as well. Doors open at 8:00. It's gonna be yuge!