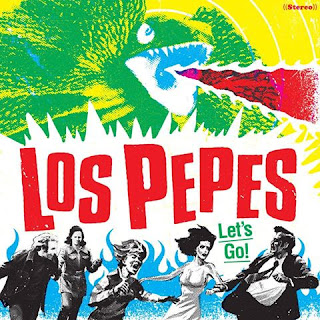 Los Pepes have been one of my favorite bands for a number of years now. Their first LP Los Pepes For Everyone was my third-ranked album of 2014, and last year's All Over Now was my 14th-ranked album of 2016. But it's with the arrival of the band's third full-length Let's Go! that we finally get a studio recording that properly captures the thundering power and sheer loudness of the London foursome's smashing live shows.

Los Pepes For Everyone, in my opinion, stacked up favorably with many of the classic albums of late '70s English and Irish pop/punk. With All Over Now more or less repeating the formula, a change-up was probably in order for the band's third LP. And so now we get Let's Go! - which is considerably harder-rocking than its predecessors but no less hook-laden. This album puts the power in power pop, from the blistering punk rock n' roll of "The Trap" to Ben's mighty Daltrey-eqsue vocals on "I Ain't The One" to the Real Kids style energy of the title track to the sweetly thrashing "You Don't Get Anything". "Perfect World" is what every power pop song should aspire to be - coming on with thumping drums and air-guitar worthy riffs, then building to a knockout chorus sprinkled with spot-on backing vocals. When the band retreats to songs reminiscent of previous releases ("Give Me Problems", "Can't Be Told"), these tracks really stand out and remind us that Los Pepes are titans of the brand of punk rock that walks hand in hand with pop.

Even with a number of great LPs already in the books for 2017, Let's Go! is a stone cold lock for my year-end top ten. It's available now in digital form via Los Pepes' Bandcamp, with a vinyl release expected any day now from the band's longtime label home, Germany's Wanda Records. In true Los Pepes fashion, the band is celebrating the release of the album by steamrolling its way through Europe for the next three weeks. Enjoy the new album, and be sure to catch these gents in their natural habitat if you get the chance!