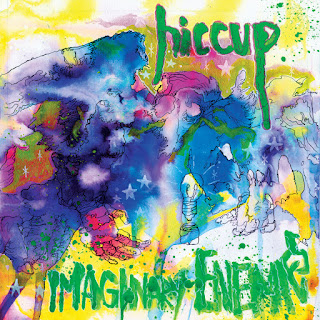 I can't believe it has already been two years since my first post on Hiccup! Since then, the New York trio has released a cassette single and a supremely delightful full-length album on Father/Daughter Records. The album, Imaginary Enemies, arrived last month and has been a fixture in my daily routine for quite some time. Hallie Bulleit (bass, vocals) has been a favorite songwriter of mine since the moment I encountered The Unlovables' demo tape 15 years ago. You may also know her and Hiccup band-mate Alex Clute (guitar, vocals) as members of The Chris Gethard Show's house band, The LLC. Drummer Piyal Basu completes the trio. And while Hiccup doesn't stray far from the clever, punky pop of The LLC, there are clearly advantages in having the freedom to write songs that exceed 30 seconds in length!

Built on a foundation of upbeat catchy tunes, tight harmonies, and the likable dual vocals of Hallie and Alex, Imaginary Enemies is pure peppy fun with a lyrical depth that may surprise you. This is exactly the kind of music I envisioned Hallie creating at this stage of her career: still rooted in pop-punk but also heavily inspired by late '80s/early '90s indie rock. "Lady MacBeth & Miss Havisham" - probably my favorite song of 2017 so far - is a perfect example of Hallie's ability to mix profound & serious lyrics with utterly joyful melodies. I've made a habit out of playing it on repeat - although on any given day I might actually conclude that "Whoa Baby" is "the hit" on this album. While I'm partial to a lot of the songs on which Hallie sings lead ("Better", "Yeah"), the harmonized vocals on tracks like "Austin" and "Dad Jokes" are well-executed and wonderfully appealing. And I appreciate that this band is the sum of what all of its members bring to the table. It's hard not to love a record that runs the gamut from the Belle and Sebastian style goodness of "Enemies of Friends" to the breakneck punk rush of "Neverwhere".

With no songs over three minutes long, Imaginary Enemies wastes little time getting to the hooks. It's an album I can recommend to both diehard pop-punk fans and anyone who fondly recalls the glory days of indie/alternative/college radio. It's just one of those records that is bound to put a smile on your face! The lyrics totally knock me out, and those harmonies could not be any more spot-on. I would no doubt consider The Unlovables one of my favorite bands of all-time, and I've got to say I enjoy Hiccup every bit as much. As 2017 continues to throw great LPs our way, I'm sure not complaining!