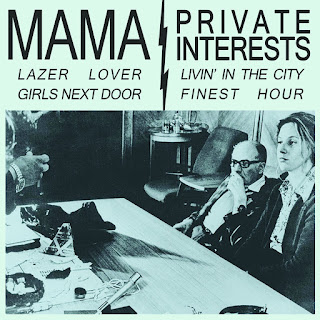 In some alternate universe where Faster & Louder is a glossy print magazine available at gas stations and drug stores everywhere, Private Interests would be gracing the cover decked in Cold War era attire - the photo positioned under the headline "Hottest New Bands of the Year!". I've been psyched to hear more music from this Minneapolis foursome since its outstanding debut EP arrived this past fall. And as luck would have it, I did not have to wait very long. Private Interests has teamed up with Chicago's MAMA to give us a split 7" EP uniting two of our greatest Midwestern cities under the banner of power pop worshiping at the twin-guitar altar of Thin Lizzy.

MAMA's two contributions to the split were taken from the band's short-run Eye in the Sky cassette, and they were fine choices to be preserved on the vinyl format. "Lazer Lover" is the "hit" here - a full-on '70s arena rock rager that would not sound out of a place on a playlist sandwiched between Nazareth and The Nuge. You've got two guitars taking it straight over the top and a singer who can really belt it. I can't help imagining myself in a darkened arena in 1978, and suddenly the lights come on and this is the song that ignites a triumphant night of rock. BAM! The terrific "Girls Next Door" slides nicely into the Big Star/Raspberries corner of power pop, but with clear nods to Cheap Trick and Lizzy as well. This is a best-case scenario for a split: I was drawn in by the presence of one particular band and ended up liking the other one just as much. I will definitely be checking out the rest of MAMA's releases!

On its half of the split, Private Interests continues to show why it's one of the most promising up-and-coming bands out there. "Livin' In The City" is a really pleasant surprise: the band's first foray into straight-up classic power pop a la The Nerves and 20/20. The verse rides a wave of melancholy on the strength of Cameron's vocal, and then that chorus punches hard. I love the amazing lead guitar work and the satisfying thump of the drums! The equally good "Finest Hour" bears all of the trademarks of a Johnny Eggerman song: more of a mid-tempo vibe with a plaintive vocal and dual guitar lines intersecting in perfect harmony. Coming from a town where Karl-Anthony Towns and Andrew Wiggins exemplify the complementary forces of power and finesse, this pair of songs could not be any more satisfying. Private Interests is quickly zooming up my list of current favorite bands!

I wanted to post on this EP as early as possible due to the extremely limited nature of this vinyl release. Just 300 copies were pressed, and only 30 of those were made available for Piñata Records to sell to the public. The remaining copies went straight to the bands to sell at shows. So if you're nowhere near these bands and want a vinyl copy, you better move fast! This record is a perfect representation of all of the great rockin' pop that's currently emerging from the American Midwest. Get on it!