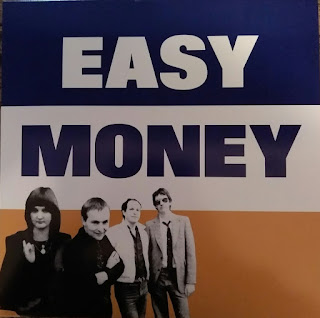 As a massive fan of Canadian punk rock both old and new, I'm tickled pink that Hosehead Records and Neon Taste Records have collaborated to rescue the recorded output of Easy Money from the dustbin of history. Hailing from Victoria, British Columbia, Easy Money released two terrific singles on Richard's Records in 1980 and was never heard from again. Those singles - "Standing In Your Shadow" b/w "No Stranger To Danger" and "Getting Lost" b/w "High Fashion" - are true hidden gems of Canadian punk in the new wave era. All four songs now return to print on the self-titled Easy Money collection, joined by nine high-quality two-track demos that have been largely unheard for decades. And while the 7" cuts may be the prime attraction, a lot of the demos are just as good (check out the Jam-inspired "It's Not Funny" and the infectiously jittery "Pretty Modern"). This album is a perfect demonstration of why I love the late '70s/early '80s era of punk music so much. It brings together the best elements of punk, power pop, new wave, and the mod revival in such a way that these songs could only have been created at the dawn of the '80s. If you're a Canadian punk rock history geek like me or just enjoy top-notch power pop, this compilation is one you ought to own. Hats off to all of the principles involved in collecting these songs and getting this compilation made. 35 years after the band's breakup, Easy Money finally has an album out!