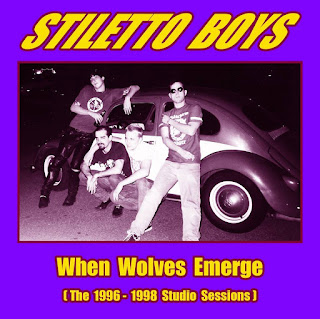 Yeah, man! I am so pumped about an amazing new compilation CD from Zodiac Killer Records and the legendary Stiletto Boys! When Wolves Emerge collects the Stiletto Boys' early studio recordings from 1996-98 - featuring the tracks from the band's three seven-inches along with several songs that never made it to an official release. For a lot of younger fans, this is a great opportunity to discover one of the greatest punk bands ever. And if you own some of the group's albums but aren't familiar with its classic early material, this collection is absolutely essential. Best of all, it's for a wonderful cause - with all profits going to defray the costs of brain surgery for guitarist Eric Benner's son Quinn.

All the way up through 2013's power pop masterpiece Liberator, the Stiletto Boys have continually raised the bar with every new release. They've topped themselves again and again. Yet I will always save a special place in my heart for their earliest, rawest, '77 style punk recordings. And that's what you're getting on When Wolves Emerge - the fruits of the band's 1996 and 1997 sessions in Rich Sexton's basement along with the songs the boys recorded at Sound Cage studios in 1998. This includes the band's highly acclaimed first two seven-inches on Zodiac Killer ("8-Track" and "Attitude Adjuster"), the "All Alone" 7" released by Screaming Apple Records, the tracks from the unreleased "Five Finger Fury" 7", and three additional songs from the Sound Cage sessions. It's great to have a single collection that documents this era of the Stiletto Boys - which combined the best of '77 powerpop/punk with the blistering fury of bands like the Dead Boys and Radio Birdman. This compilation includes many of my favorite Stiletto Boys songs of all-time (like the original versions of "Killing Me", "8-Track", and "Don't Stop"). And you won't want to miss ultra-rare covers of the Gigantor theme song and The Beatles' "I Feel Fine"!

When Wolves Emerge is the perfect complement to the rest of the Stiletto Boys catalog. If you start with this collection and then listen to all three studio albums in sequence, you truly hear the growth and full maturity of an extraordinary band. But I must admit that there's nothing quite like the jolt I get from this early stuff. It's just so raw and exciting and full of the spirit of the original punk rock movement. I consider the late '90s an overlooked golden age of punk rock, and the Stiletto Boys had a lot to do with that. Get When Wolves Emerge directly from the Zodiac Killer web site!

Hi there. Just seen a video on Youtube suggesting that Sean Wolfe passed away in January. WTF?