New album from The Gee Strings! 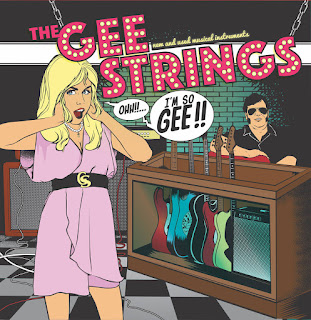 I will always list '77 style punk rock up there with all of the best things in life. Nothing puts me in a happier place than hearing this style of music played well. And I can always count on Germany's Gee Strings for some top-notch '77 punk. At it since 1994 and sounding better than ever, The Gee Strings have returned with their first full-length album since 2006. It's called I Am So Gee!!, and its release is a collaboration between Adrenalin Fix Music and Strychnine Records out of France along with Ghost Highway Recordings and KOTJ Records out of Spain. Founding members Ingi and Bernadette are two of the best in the business - the latter a red hot guitarist in the Steve Jones/Johnny Thunders/Cheetah Chrome mold and the former sounding like the love child of Joan Jett and Iggy Pop. While very much sticking to the band's roots in Pistols/Thunders/Ramones worship,  I Am So Gee!! is far from predictable or repetitive. Showing its experience and maturity, the band pulls from a wide variety of songwriting influences within the early punk realm. I like that these songs are built around a combination of classic punk riffs and really strong hooks. The straight-up '77-style slammers (like "Trying To Forget" and "Have To Say") are quite good. That's no surprise. At the same time, I'm hearing some new things from The Gee Strings. "Can't Call It Love" and "I Will Get You" fully embrace the melodic/power pop side of '77 punk, while the playful and peppy "The Punk" could almost pass for a long-lost Rezillos song. Closing track "Punk Rock Heart" is something very close to a ballad, and I really feel the passion and sincerity coming through. It's always a little bit of a risk for a punk band to try a "slow" song, but The Gee Strings genuinely pulled it off!

Without a doubt, The Gee Strings have made an album that plays to their strengths. This band is a punk purist's dream, and its influences remain obvious and unassailable. A fine cover of Slaughter and the Dogs' "Situations" makes that perfectly clear. But befitting a band releasing its first LP in a decade, The Gee Strings sound fully re-energized and more evolved in the songwriting department. I like a band that gives you a whole lot of what you expect but also a little bit of what you don't. More than anything else, you can tell that playing punk music is fun for The Gee Strings. I Am So Gee!! just puts a smile on my face, and it's a great reminder of why I came to love punk rock in the first place.