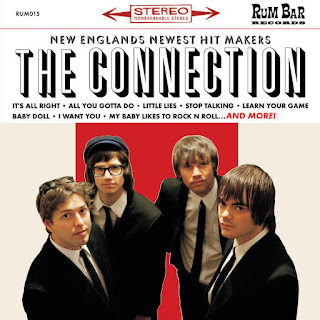 It's official: this blog has been around so long that I'm now writing about reissues of albums that I first reviewed when they were new! To celebrate the fifth anniversary of The Connection's New England's Newest Hit Makers, the mighty Rum Bar Records has re-issued this classic debut album on compact disc. This title, released by the band as a limited 12" in October of 2011, sold out in a week. Rumble Records (Spain) and SP Records (Japan) also released versions of the album in early 2012. CD and LP copies have been out of print for several years, so now fans will get another chance to own New England's Newest Hit Makers in a tangible format. As a bonus, you also get the tracks from 2012's Seven Nights To Rock EP!

A little history on The Connection: Brad Marino and Geoff Palmer formed the band in March 2011, and from there things moved really fast. By May, the band was in the studio working on New England's Newest Hit Makers. The album was completed in June, and The Connection started playing shows that summer. New England's Newest Hit Makers had its digital release in August, and I reviewed it a month later. Little did I know then that The Connection would eventually become my favorite band. But I was impressed enough to give the album an "A+" review! While The Connection has only gotten better with each subsequent release, I'm struck by how well its debut album holds up after five years. Even before Brad and Geoff had fully figured out what they wanted The Connection to be, their musical chemistry and talent for penning timeless rock n' roll songs were undeniable. Some bands are just born with it, ya know?

New England's Newest Hit Makers sounds like some long lost treasure from the early to mid '60s - largely inspired by the British Invasion and early Beach Boys via Chuck Berry. Straight-up rockers like "It's Alright" and "Stop Talking" remain signature songs for The Connection. "All You Gotta Do" and "I Want You" demonstrate that it's hard to go wrong replicating the '62-'63 Beatles. And on tracks like "Learn Your Game" and the Dee Dee Ramone/Chesterfield Kings cover "Baby Doll", The Connection quickly established themselves as key players in a new generation of garage rock.

With the Seven Nights To Rock tracks tacked on, this reissue of New England's Newest Hit Makers is a great look back at the early years of The Connection. I love reliving that magic moment when Kris "Fingers" Rodgers became part of the Connection equation on keyboards. And covers of the Ramones and Real Kids acknowledge influences that would become especially significant on later releases. Get the CD for just ten bucks from Rum Bar Records!