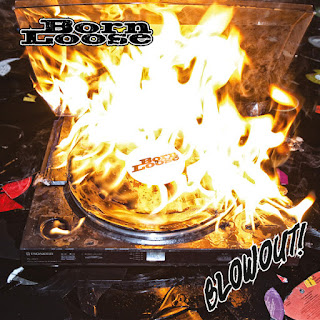 Hot damn! Born Loose has a new album out on Hound Gawd! Records, and the thing will totally destroy anything in its path! Prepare to be bruised and battered in the best way imaginable! The one-sheet for this release describes it as the "soundtrack for your backyard fight club". Oh my god, that's brilliant! And it's so very true! If ever there were an album perfectly suited to accompany extreme recreational violence, this would be it! Hot on the heels of the great "I Loathe You" single and that smashing split 7" with the almighty Lovesores, Blowout! is precisely the beer-soaked blood and guts punk rock n' roll masterpiece I was hoping for. It's gonna take a serious run at punk rock album of the year honors!

Born Loose, of course, is the New York City outfit featuring the legendary Larry May (Candy Snatchers) on lead vocals. He's joined by guitarist Suke (Iron Prostate), bassist Shane Konen (Live Ones, Ghetto Ways), and drummer Eric Robel (Heroin Sheiks, Nova Express). Blowout! is the band's second LP, and every track is a swift and violent kick to the teeth. May, an all-time great punk front man, has never sounded more deranged or pissed-off. He and his band mates are in no mood for screwing around. From start to finish, they're on the attack - mixing scorching garage-punk with elements of Detroit rock, scuzzy '70s punk, light speed early '80s hardcore, and hints of the Chuck Berry gone wild stylings of Bon Scott era AC/DC. Suke's lead guitar is on fire, and that rhythm section is as primal and relentless as they come. You see song titles like "Waste Me", "Fair Warning", and "Ain't That Swell (Baby Go To Hell)" and expect a certain kind of band. And that is exactly what you'll get! At a time when punk music is rarely as dangerous and thoroughly unwholesome as it ought to be, it's great that we can still count on bands like Born Loose to stand for excessive drinking, questionable life choices, and ill will towards men. If you long for the heyday of the Dead Boys and Stooges (or even Candy Snatchers and New Bomb Turks), Blowout! is an album you need to own. Grab an adult beverage, crank the volume way up, and enjoy pissing off the neighbors. My European friends should check out the band's upcoming tour dates!

Few encounters with a dude from this band...total dick.