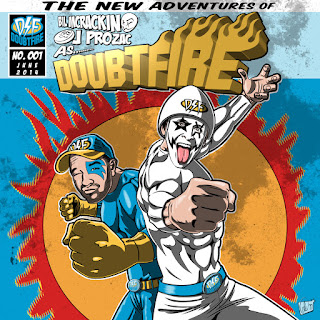 What do you call a super group when it's a duo? A super duo! Made up of Bil McRackin (McRackins) and J Prozac (The Prozacs), Doubtfire is about as super of a duo as you'll find in the world of pop-punk. Perhaps that explains the band's comic book cover art! These two guys have over 10,000 total releases to their combined credit (only a slight exaggeration), and they've both played a large part in keeping pop-punk music going strong for the past two decades. Now they've joined forces and become Doubtfire. Not surprisingly, the results are terrific! The band's debut album features ten original compositions plus two covers. Sure: there are songs that will remind you of McRackins (like "Kung Fu Magoo"), and there are songs that will remind you of The Prozacs (like "Eyes On You"). But the majority of the songs are a perfect combination of both band members. And I think that was the point of these two individuals collaborating in writing songs. Doubtfire brings together the musical strengths of both men. You've got Bil's goofy persona and impressive command of Ramones-style hooks along with J's intensely personal lyrics and considerable talent for writing quality pop songs. And while I never have any objection to touting pop-punk records where every song sounds pretty much the same, this is not that kind of album. From the rockin' opener "California" to the classic Lookout! Records stylings of "Just Maybe" to the grown-up pop-punk of "Love This Rock And Roll" to the high-speed adrenaline of "Spit It Out", Doubtfire's debut offers tremendous variety without veering too far from what these two guys do best.

It's pretty amazing when you think about how this album came to be. Bil and J, separated by more than 3,000 miles, collaborated on lyrics and music for each of the 10 original songs. J ended up flying to Vancouver - where he and Bil worked for a week to complete the album. This was a true two-man effort. No outside musicians were involved, and Bil handled all recording, producing, and mixing himself. Especially in regards to the vocal harmonies and lead guitar hooks, the album is a textbook case of how a pop-punk recording should be produced. It sounds like a million bucks! Just as importantly, the songs are really strong. The choice of covers (Pete Townshend's "Let My Love Open The Door" and the Ginger Wildheart-penned "Superpowered Superfly") emphasizes the wider array of influences that informed this album. Of course these guys love The Ramones ("Punk Rock Heart" is a wonderful love letter to da bruddas). But they've infused plenty of glam/rock n' roll into their sound as well. It's great to hear a couple of pop-punk lifers affirming the staying power of this musical form. You'd expect these guys to get together and do something really excellent. And sure enough, Doubtfire's debut does not disappoint. Let's hope for a sequel!