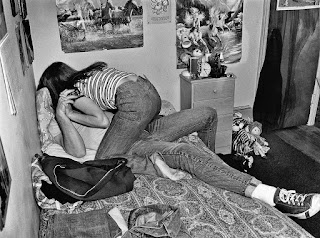 Has it really been over two months since I last reviewed a Canadian band?! Damn, I've been slacking! But I've got a good one for you today. Hailing from Montreal, The Sick Things are a brand new band featuring former members of Barn Burner, Prevenge, Nerve Control, Windpisser, and the Castavets. They just played their first gig last week, and they've released an excellent demo that is well worth checking out if you like power pop. While Montreal has been a hotbed for punk/power pop hybrids in recent years, The Sick Things are more straight-up power pop. Think Cheap Trick/Big Star/Dwight Twilley mixed with some good old '70s riff rock. These guys definitely hit the power side of the power pop equation - with muscular guitars and thumping drums reigning supreme on these three mid-tempo tracks. Especially on "We Got It Figured Out" and "Empty Castles", singer/guitarist Cam Turin shows a considerable talent for crafting anthemic choruses and melodies that really stick in your head. And his songwriting totally captures that eternal teenage feel that is such a hallmark of great power pop. Fans of The Jeanies and Terry & Louie ought to be all over these demos, and I'm excited as hell to hear more tunes from The Sick Things!