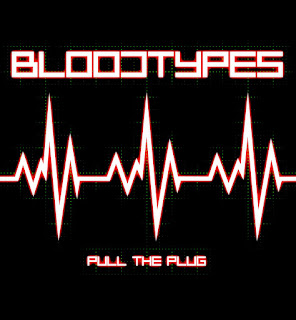 Woo hoo! The long-awaited second album from The Bloodtypes has arrived! What a wonderful way to finish off a great year for music!

Hailing from Portland, Oregon, The Bloodtypes are one of my favorite present-day bands. I just love what this group represents: a return to the energy and fun of '77 punk/new wave and early '80s synth-pop - with lyrics that walk a fine line between sci-fi silliness and serious social commentary. It's been three-and-a-half years since The Bloodtypes released their first album, and the brand-new Pull The Plug does not disappoint! These are the catchiest and strongest songs yet from this most excellent band! If you were looking forward to more Rezillos/Blondie/Epoxies type new wave action, well there's plenty of that to be found here. But on this record, the band integrates all kinds of influences into its distinctive punk/wave sound. Taking on styles ranging from full-on early '80s hardcore ("Panic", "Rejected") to melodic synth-pop ("Modern Love", "Television Dreams") with additional hints of dance, prog, and garage rock, The Bloodtypes are not about to give you a chance to get bored! Seriously: there's no other band out there quite like this! Schneck Tourniquet continues to impress on lead vocals - showing the spunk to propel the album's more upbeat tracks along with a tenderness and humanity so crucial to slower songs like "Back From Space". And what a lovely voice she has! As you'd expect from a Bloodtypes album, songs cover such topics as S & M, spies, boyfriends in space, and the mass murder of aliens. But the band also tackles contemporary concerns about technology and society on this record. A lot of these songs have a great deal to say about how we're being manipulated into our own unhappiness by television, electronic devices, and a larger cyber-universe that distorts our realities. That said, the "message" of this release is not heavy-handed in any way. This is a fun record that will make you want to dance, jump around, and enjoy life. And if it also makes you think a little, well that's icing on the cake!

Pull The Plug is available now as a digital download directly from The Bloodtypes' Bandcamp. Visit the P.Trash Records and Bomb Pop Records web sites for information on how to order this release on LP and CD! I strongly urge all of my European friends to catch The Bloodtypes on tour in January. This is a show you won't want to miss! Click here for tour dates!