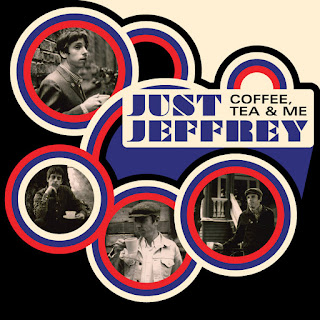 Check it out! For the first time in 12 years, we get a solo album from Fashionism and Tranzmitors lead singer Jeff McCloy! But unlike his previous solo LP, the brand-new Coffee, Tea & Me is a noticeable departure from the type of record he typically makes. Recorded under the moniker of Just Jeffrey, this 18-track effort demonstrates that McCloy can excel outside the realm of '77 punk and power pop. And while his knack for crafting clever and catchy pop songs remains very much on display, here he embraces a much wider array of influences. Just as importantly, he proves talented enough to "stretch" himself creatively. Essentially he's made a singer/songwriter's record in the tradition of guys like Ray Davies and Paul Weller. Coffee, Tea & Me is an eclectic but distinctively English set of songs full of personal storytelling, reflections on the past, and pointed social commentary. In many ways, McCloy has given us his autobiography in song.

The name Just Jeffrey says it all. While McCloy did recruit several friends to play on the album, this project was his baby entirely. These songs are an expression of who he is and what he's experienced. If you're expecting Fashionism or the Tranzmitors, that's not what this record is. But I can honestly say that Coffee, Tea & Me is at the same level of quality as any release that McCloy has ever played on. As the expression goes, this album is "all over the place". You'll hear jangly pop songs, Cure-like dirges, mod/soul ravers, introspective ballads, English traditional numbers, and even a couple of forays into outright weirdness. This is not the same old Jeffery we're used to hearing, and I wouldn't want it any other way. 18 tracks is a pretty ambitious number for one album, but something crucial would have been lost if this release had been more tightly edited. The album is exactly the length it needs to be for McCloy to tell his story. His emotional treatment of this material is quite powerful, and overall this is a terrific collection of songs. Of course I'm hoping he continues to make punk rock records for years to come. But let's not pigeonhole McCloy as an outstanding punk songwriter. Coffee, Tea & Me proves him to be an outstanding songwriter, period.