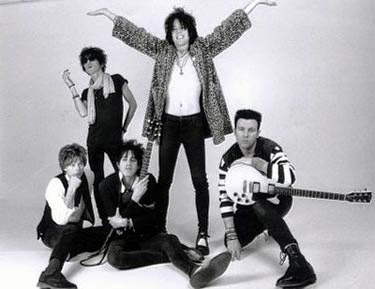 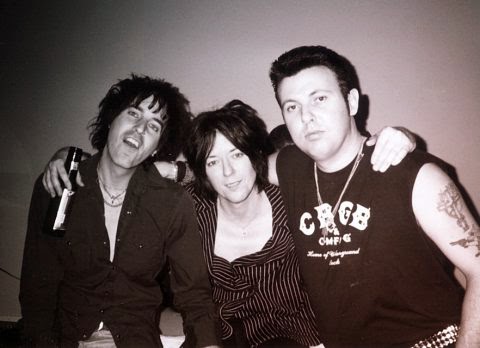 Out of all the great unheralded bands I championed in my late '90s heyday, Phoenix, Arizona's Beat Angels might have been the greatest and most unheralded. Everyone I know who's heard the band's two albums would probably consider them both to be classics of glam/punk/powerpop. Sadly, I'm only talking about a handful of people. Although the Beat Angels were beloved by local crowds and allied with a big name in the music industry (producer Gilby Clarke - formerly of Candy and Guns N' Roses), they were one of those bands that just never quite caught on with the punk underground or the alternative nation. Thankfully, their music is still out there - although not easy to find.

When the Beat Angels formed in 1994, they viewed themselves as descending from a lineage of bands like the New York Dolls, Sex Pistols, Rolling Stones, and Cheap Trick. And as hard is it may be to believe it now, that put them at odds with what was going on in underground music at the time. You could say they were behind the times, but more likely they were ahead of them. Looking now at how many bands I come across that swear allegiance to the glam/trash and power pop greats of yore, it seems like good taste has come back around. But in a day and age when everyone and his brother was trying to be the next Kurt Cobain, it was far from "cool" to worship the The Clash, Raspberries, Johnny Thunders, and Badfinger. Like kindred spirits the Trash Brats, the Beat Angels bucked the trends of the times and fully embraced punk's glam roots. The group's albums Unhappy Hour (1996) and Red Badge of Discourage (1997) were not big sellers. But if they'd never existed, I'm not sure the glam-punk scene would be where it is today.

Singer Brian Smith (ex Gentlemen Afterdark) and guitarist Michael Brooks (ex Motorcycle Boy) had known each other from crossing paths in late '80s Hollywood. And after becoming reacquainted in Phoenix, they recruited Detroit-bred guitarist Keith Jackson (longtime fixture in the great, criminally overlooked Glass Heroes). Those three would form the permanent nucleus of the Beat Angels - and their collective set of influences helped make the band what it was. Smith and Brooks were veterans of the L.A. glam scene. Jackson was (and still is!) a '77 punk diehard. Clarke, having played on Candy's power pop classic Whatever Happened To Fun, clearly "got" the sound the band was going for. Unhappy Hour and Red Badge of Discourage were perfect syntheses of glitter-tinged '70s punk and sing-along power pop - with lyrics informed by beat/pulp/noir literature and the seedy underbelly of Hollywood glamour. Inspired by his own hard luck experiences and the writings of authors like Jim Thompson and Harry Crews, Smith used the three-minute pop song as a vehicle for vivid, powerful storytelling - weaving tales of beautiful losers, broken dreams, strippers, addicts, drunks, and glamorous women with dark secrets. I've previously documented what a legendary year 1996 was for punk albums, and Unhappy Hour was the best of the whole lot. Red Badge of Discourage is darn near as good - and some fans will tell you it's better!

Anytime I listen to the Beat Angels, it's like I enter a portal to an eternal cocktail hour. I walk into the lounge and punch up "Hungover With Jenny" on the jukebox. I see Dean Martin chatting up some lovely thing at one end of the bar, Don Draper schmoozing some suit at the other. Cigarette smoke permeates the air, and sad souls drink alone - pondering the hopelessness of existence and reflecting on dreams deferred. I eye up some faded starlet in the darkest corner of the room, and I can read her tragic life story with one glance. That's the kind of writer Smith was - a Paul Westerberg or Ian Hunter for a certain generation of '90s punk rockers like me. After the Beat Angels split, Smith moved to Detroit and became managing editor of the Metro Times. I've often wondered if he's continued to write songs and make music. His presence in the world of underdog rock n' roll is still dearly missed.

The Beat Angels did record a third album in the early 2000s - again with Clarke producing. But for a variety of reasons, it was never completely finished or properly mixed. I know this unreleased, "lost" Beat Angels album was circulating on-line for a time - but I think it's disappeared from the face of the earth. Perhaps that's for the better given that the band's two official releases are so flawless and an unfinished product might not be up to the same standards. Meanwhile, I've been waiting for a long time for some label to reissue both of the band's classic albums. Perhaps I shouldn't hold my breath. We are, after all, living in times when even legendary bands like the Buzzcocks have to resort to crowdfunding to get their new music released. Unhappy Hour and Red Badge Of Discourage can still be had for a reasonable price from a few sellers at Amazon. And if you were lucky enough to have seen the Beat Angels live back in the day, I envy you!

http://www.lastbandit.com/beatangels/
Posted by Lord Rutledge at 8:46 AM

One of the best live bands that I have ever seen. Brian Smith easily fits into my list of the top ten frontmen of all time.

One of the best live bands that I have ever seen. Brian Smith easily fits into my list of the top ten frontmen of all time.