Giuda does it again! 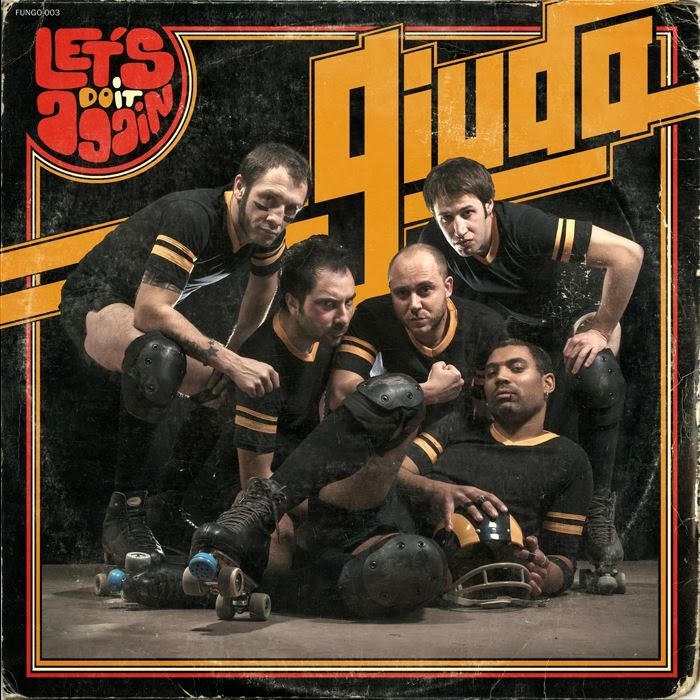 What do you do for an encore when you've already made one of the greatest glam/pub rock albums of all-time? If you're Giuda, you simply go bigger. As the title suggests, new album Let's Do It Again does not mess much with a winning formula. These handsome and charming Italians continue to replicate that classic early '70s glam pop sound fortified with the proto Oi! wallop of early Cock Sparrer. But this time around, they've gone for a beefier sound with even better production and slightly more ambitious songwriting. If they had just done a straight copy of their extraordinary debut Racey Roller, it surely would have fallen short. But by upping the '70s arena rock quotient (think Thin Lizzy and Bon Scott era AC/DC), Giuda have managed to deliver a slightly different but equally great sophomore LP. Just issued in the United States by TKO Records, Let's Do It Again recalls a time when fun rock n' roll was king and massive hooks permeated the airwaves (and roller rinks!).

Sure, they have the good sense to mimic a beloved era of popular music. But what really separates Giuda from the rest of the glam/punk pack is their talent for writing incredible songs and their ability to imbue these classic sounds with their own signature style. Even with blatant nods to the likes of T. Rex ("Yellow Dash"), The Sweet ("Teenage Rebel"), and Gary Glitter ("Roller Skates Rule O.K".), Giuda's own personality shines through even more so on this album. These fellas have come to party - and you're totally invited! And in keeping with this band's m.o., every song is a hit! Let's Do It Again offers an awesome mix of throwback glam gems, meaty riff rockers, and chant-worthy football anthems. And the songs that show a progression in Giuda's repertoire are some of the best on the album. Tracks like "Get That Goal" and the leadoff smash "Wild Tiger Woman" suggest a less over-the-top Turbonegro, while "Rave On" echoes with the pub-punk inflections of bands like The Vibrators. Top to bottom, the hooks on this thing are gigantic!

Giuda, at this point, just might be the best band in the world. And that's no joke! I could tell, based on title alone, that closing track "Hey Hey" was going to be an anthem. And that pretty much tells you everything you need to know about Giuda. If their songs were any catchier, we'd have a worldwide health epidemic on our hands. Remember when all the great bands were about writing killer songs, rocking hard, and making sure everyone had a good time? Sadly, such values have generally disappeared from rock music over the past 20 years. Giuda may single-handedly revive them. I just can't relate to all the "edgy" gloom and heavy seriousness that the kids are digging these days. But "Wild Tiger Woman"? Now that speaks to me! Long may these mighty Romans reign!