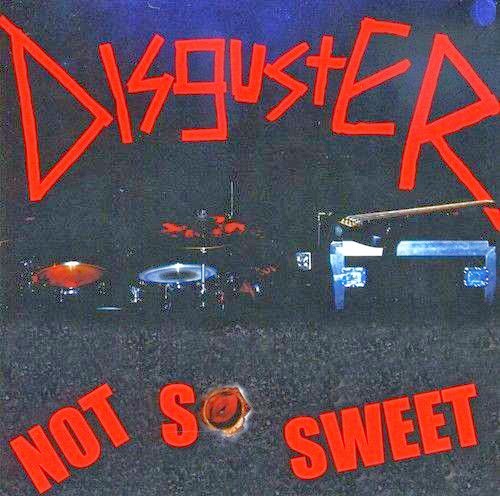 Given that I attempted a retirement from writing between late 2007 and mid 2011, I missed a lot of great music while I was out of the game. So one of the things I'd like to do with this blog from time to time is to get caught up on some of the essential stuff I missed. Over the next couple of months, I'll be writing quite a bit about Zodiac Killer Records. Looking at the list of releases that have come out on ZKR in recent years, I definitely put this label among the very best in the punk world. ZKR has worked with everyone from legends like Electric Frankenstein and The Supersuckers to international sensations like Dead Vikings and Sonic Negroes to modern-day greats like The Hitchhikers and Stiletto Boys. I fully support Ron's mission to keep punk music dirty and dangerous. And one of the most representative releases of what his label is all about has to be Disguster's superb 2009 album Not So Sweet.

Disguster is notoriously one of the most acclaimed live bands in southern California. If you enjoy the gloriously unwholesome stylings of the Dead Boys and Dwarves or the classic SoCal sounds of The Humpers and Black Flag, this is definitely a band for you. I also hear strong hints of Bon Scott era AC/DC, which can never be a bad thing. Factor in two killer guitarists, a couple of Hitchhikers, and a creepy degenerate peeping Tom front man named KC, and you've got yourself some first rate sleazy punk rock n' roll! What I like about Not So Sweet is that it takes the wildfire energy the band is known for on stage and finds a way to capture it in the studio. Close your eyes while you're listening to "End of the End", and you're immediately transported to some club or dive bar that's about to have its roof blown off. And while I love the full-on ferocity of this track and the face-smashing cover of Led Zeppelin's "Communication Breakdown", this is far from a one-dimensional record. Not So Sweet finds Disguster working with a number of different tempos and really showing off their songwriting chops. "Feelin With A Dealin" is up there with the best of The Humpers' stuff, while "Secret Shame" is truly a punk classic of its time. And even if you've never ingested an illicit chemical in your life, you'll be hard pressed not to jump out of your seat and shout along loudly to the chorus of "Drugs". It's that catchy.

As the name suggests, Disguster is not a band for the easily offended. If you're ultra-PC or prefer your punk rock to be "nice", you might wanna steer clear. Not So Sweet is appropriately named, and it's darn near a masterpiece of its genre. This is punk music the way it was meant to sound - raw and nasty, with real guts and a sick sense of humor. I'm embarrassed to have been unaware of this great album for so long, but I've been making up for lost time in recent days...with the volume cranked way up! Check out http://www.zodiackillerrecords.com/ for ordering information!