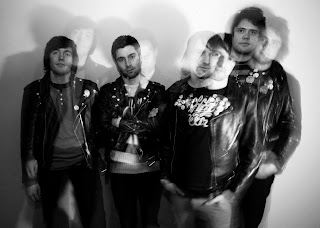 This is turning into a summer of blockbuster albums, and one that should not be overlooked is the self-titled debut album from The Mandates. The Calgary foursome does that '77 punk meets powerpop type thing that I can never get enough of, and fist-pumping anthems like "Daggers' Girl" should be a lock for everyone's summertime mix. In the music of The Mandates, I hear the strong influence of '77 style punk both classic (Boys, Dead Boys) and contemporary (Exploding Hearts, Clorox Girls). If their sound seems to lean just a little bit more towards the latter, it's probably because they enlisted the legendary Pat Kearns to mix and master the album. And of course it sounds great! If you're into newer bands like Youthbitch, The Cry!, and Barreracudas, surely The Mandates will be right up your alley.

While still a relatively new band, The Mandates are made up of seasoned veterans of the Calgary punk scene. Guitarists Brady Kirchner (Sudden Infant Dance Syndrome, The Funfuns) and Matt Wickens (The Tension Slips, Hollywood Gods, Mossleigh) are joined by Jimmy James (Knucklehead) on bass and Warren Oostlander (The Throwaways, No Problem) on drums. Kirchner and Wickens share singing duties and team up for a dual guitar attack that channels Thunders & Sylvain via Terry Six. Opening track "Is She Coming Back?" comes on with high energy glammy swagger a la New York Dolls/Hollywood Brats, and overall there's a major rock n' roll element in this band's music that you don't always hear in contemporary variations on punk/powerpop. Songs like "Gotta Forget That Girl" and "I Stayed At The Arcade" show plenty of Exploding Hearts love, and I've got no objection to that whatsoever. And when these fellas slow down the pace and find that perfect powerpop groove, they really hit the target with hooky gems like "Daggers' Girl". All in all, this is a super-good debut from a band that's got plenty of talent to go with all that impeccable taste. The guitar work (clearly a point of emphasis for mixmaster Kearns) is killer, and the whole album works up a goodtime energy that's ideal for summertime listening. Song lyrics revolve around being young and girl crazy - Who can't relate to that? This is what some might call a "party record". Even the songs about heartbreak and rejection are tremendous fun. If "Tonight" doesn't get you revved up for a night of teenage kicks, perhaps nothing will!

Alright! The Mandates have delivered a dark horse contender for my year end top five. Get the cassette from Shake! Records. Vinyl still available from Mammoth Cave!