Born To Die In Suburbia 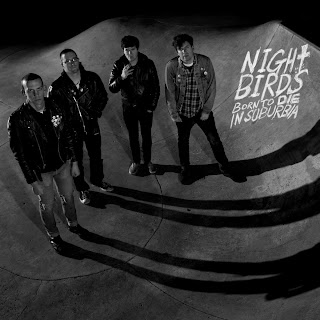 Yessssss! It's finally here: the best album I've heard since I started this blog two years ago! I've had the calendar circled for months! I'm declaring today an unofficial holiday. You will find me dancing in the street, dressed like Snake Plissken. I have procured celebratory fireworks. Night Birds über alles!

I have been known to sometimes go a little overboard in my reviews (Who, me?). But in this case I'm far from the only individual who's raving about Night Birds' long-awaited second LP. For my money, this is the best punk rock band of present day. And as awesome as their debut album was, Born To Die In Suburbia is at another level entirely.

Out today on Grave Mistake Records, Born To Die In Suburbia is the soundtrack to a modern world on the verge of collapse. While not quite a concept album, Born To Die paints a grim portrait of a society ravaged by addiction, dysfunction, and soulless consumerism. In terms of musical approach, Night Birds haven't messed with a winning formula. The foursome continues to draw from the ripping melodic hardcore of early '80s California and points beyond (Zero Boys, Naked Raygun), and the band's trademark surf guitar is as prominent as ever. But this album is far from "more of the same". Two years on and strengthened by hundreds of live performances, Night Birds have come on with a tighter and considerably more powerful attack. If these guys had any more chemistry, Walter White would have them on speed dial. Perhaps most significantly, primary songwriters Joe and Brian are in such a zone that I suspect they may be taking performance enhancers for the brain. This is the band's finest and most varied collection of songs to date. For sure, frantic burners like the title track and "No Spoilers" will have you raging in your bedroom and jacking up the volume. And the surf instrumentals shred as expected. But there are songs here - like "Less the Merrier" and "Golden Opportunity" - that break the fast and furious mold of previous recordings. And Night Birds may have given us a career defining song in the haunting epic "Nazi Gold".

As always, I'm blown away by Night Birds' ability to take inspiration from the classic punk sounds of yore and make them fresh for current times. Born To Die, while certain to thrill fans of early '80s beach/skate punk, is very much an album for now. It's got an urgency to it. The lyrical content is particularly pertinent - mixing scathing social commentary with character sketches of despairing souls doomed to hapless existences. The title track, built on a premise that a lesser band would play for laughs, illuminates the reality of a dying American dream. And "Modern Morons" is a remarkably truthful indictment of contemporary society ("We elect whores who should to be shot/Watch TV with no fucking plot"). Joe Keller is hands-down my favorite lyricist out there, and he's never written more compelling material. The intriguing and mysterious "Nazi Gold" is his magnum opus.

Given that Night Birds went through a major personnel change last year (P.J. Russo is in on guitar for the departed Mike Hunchback), it would have been reasonable to wonder how the band would be affected. But really, the transition has been seamless. Rather than attempt to imitate his predecessor, P.J. brings his own (and equally awesome) style to the table. And that has certainly played a vital role in the growth of the band's music. This is pretty much the same old Night Birds, but in some ways it's not. It's incredibly difficult in punk rock to move forward without dramatically changing your sound. But Night Birds have pulled it off, and they've delivered a punk rock classic for the end of days. As a wise man once said: Pretty good. Pretttttttty, pretttttttttty, pretttttty good!