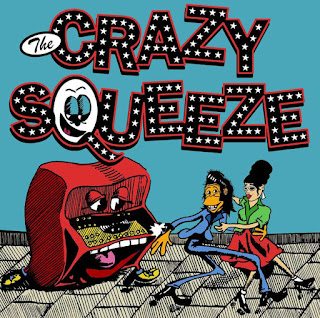 So after four-and-a-half years in deep storage, my old turntable has been unearthed from the bowels of the parental estate. It was about time. What kind of punk rock blogger doesn't have a working record player in his home? And sure enough, the thing still works! I gotta admit it: the instant gratification of streaming a song on-line still pales in comparison to the classic thrill of dropping the needle on a rock n' roll record!

Let the record show that the first thing I played on my new old turntable was the debut 7" by The Crazy Squeeze. You may recall I reviewed this punk rock super group last summer. As I'm known to do, I hyped them up pretty good. I saw some of the label spiel on-line, and I'm like, "Who wrote this bullshit?" And I realized, yeah, it was me. But, you know, it's not like I was wrong. And on their debut single, this fantastic four of punk rock n' roll have delivered the proverbial goods. Co-released by two veritable titans of labeldom - No Front Teeth and Rapid Pulse Records - this bad boy is a traditional 45 RPM record with a big hole and two songs. You have the "hit" on the A-side and a cover on the B-side. "Gimme A Kiss", featuring drummer Johnny Sleeper on vocals, is a rockin' blast of poppy glam action that falls somewhere in between The Boys and the New York Dolls (I guess that means it sounds a little like the Hollywood Brats? Sure!). Great tune! It's more fun than BOGO night at the whorehouse, with hooks at every turn and Johnny Witmer channeling Johnny Thunders on the lead guitar. It seems kind of absurd to say that Witmer is underrated in The Stitches. But when you hear him playing this kind of sleazetastic rock n' roll, you gain a deeper appreciation for his talents. The dude's a killer! He takes the mic on the flip, a rip-roaring rendition of Cock Sparrer's "I Need A Witness" (Yeah, going way back for that one!). As expected, it's first rate dive bar rock n' roll (or as they say on the No Front Teeth side of the pond, "pub rock"). You can practically smell the booze permeating the room, and Witmer and Frankie Delmane kick up a dual guitar racket that would do AC/DC or the Stones proud.

So what's next for The Crazy Squeeze? Hopefully an album - which I know they've been working on for a couple of years. Given the stature of the members' other bands and the group's growing reputation as one of the best live acts in southern California, expectations for The Crazy Squeeze were bound to be high. But on their first turn at bat, they've freaking crushed it. And we haven't even gotten to their best songs yet! Any old bunch of jerkoffs can form a band and play this style of music. But it takes one heck of a band to play the style well. The Crazy Squeeze are top shelf glam punk rock n' roll. They've got the chops. They've got the tunes. They've got the chemistry. Do yourself a favor and buy "Gimme A Kiss"...and everything else this band puts out!