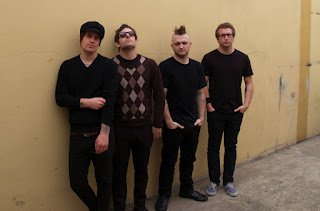 It's been a good year for California punk. Well, actually every year is a good year for California punk. In just the past few months alone, I've posted on Images, The Three Two Ones, The Hitchhikers, and Piccolo Pete - all from southern California, and all fucking great. Now I've got another good one for you: DimeRunner from Fullerton. These dudes play fast and frantic punk rock with snotty vocals and sing-along choruses. They refer to their musical style as "punk with a pop twist". Sounds like the kind of band I'd be into, doesn't it?! And if you're a fan of Orange County punk rock both new and old, I think you'll be into 'em too!

DimeRunner has two new-ish 7-inches out. If you're digitally inclined, you can check out the A-sides of both on the group's ReverbNation page. "Recharged Rejects" will thrill fans of The Stitches, while "It's An Emergency" adds a touch of synth damage to a frenetic punk attack. Both tunes are top drawer. These guys just have a knack for coming up with these classic hooks that make you wanna shout along to the chorus and pump your fist high in the air. I believe that's the "pop twist" they are referring to. So it's not really "pop" per se, but the hooks are undeniable. Think more along the lines of old school O.C. punk meets new school O.C. punk with a hint of new wave. It's a "California sound" all the way. Fans of the Modern Action/Hostage Records scene will want to grab both singles and stay on the lookout for more to come. Bring on the full length, fellas!

They have a full length now! Check it out
www.facebook.com/DIMExRUNNER