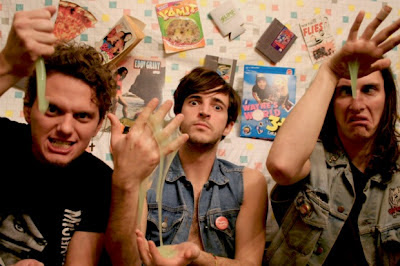 I cut my teeth writing about pop-punk music, so it's a little strange that I've been doing this blog for over a year without reviewing a single pop-punk band. That changes today, and boy did I ever pick a good band to feature! Mean Jeans have given us not just the best pop-punk album of this year but possibly the best pop-punk album of the last ten years. It's been a long time since I've heard a pop-punk record that could legitimately rival the best stuff that was coming out on Lookout! Records circa the early '90s. On Mars totally does! This particular sub-genre of music is oft-criticized, sometimes with good reason. When pop-punk is bad, it's really bad. But when it's good, it's pretty much the best music ever. And being a "glass half-full" kind of guy, I'd rather focus on the latter. Mean Jeans make pop-punk music the way it was meant to be: simple, stupid, and impossible to get out of your head. There's a very fine line between being inspired by The Ramones and flat-out copying The Ramones. A lot of bands cross that line, but Mean Jeans drunkenly walk it without stumbling over. If I think about where pop-punk in general has gone wrong over the last 10-20 years, it's that it's gotten farther and farther away from rock n' roll. And if the rock n' roll has been largely missing from pop-punk in recent years, Mean Jeans have put it back in!

Never mind that it was released three months ago. On Mars is the summer album of 2012. Put it on, crank it up, and you've got yourself an instant beach party or pool party (assuming you're actually at the beach or the pool). It's just straight-up good times. Compared to the band's last album, On Mars is poppier and less frenzied, but no less fun. With the tempos brought down a little, all those infectious bubblegum hooks really get the chance to shine. In both the vocals and the songwriting, the influence of Joey Ramone can be heard all over this record. And old Joey would have loved these guys. They may come off as hard-partying goofballs from outer space, but don't believe for a second that they're not immensely talented and extremely dedicated to their craft. Everyone knows it takes real smarts to make music this dumb. For sure, "Ready 2 Rip" is the instant classic opening track that every truly great album's got to have. But it's only the first of many tunes that'll have you yelling, "Holy shit, that song's awesome!" That little hook that comes in at the end of the chorus to "Life On Mars" has been lodged in my brain for weeks. It ain't leaving anytime soon. "Hangin' Tuff", "Crummy Crummy", and "Don't Stop Partying" run well past three minutes and subsequently feel like "epic" pop-punk songs. They're just that good. As song titles like "Total Yo-yo" and "I'm A Pile" suggest, Mean Jeans' musical progression has not in any way involved these guys taking themselves seriously. Sure, a couple songs here are self-reflective and genuinely sad (even yahoos have feelings!). But at the end of the day, these are still the same macaroni-loving, Jager-swilling, sci-fi obsessed party dudes you've known and loved for years. You want stupid, catchy fun, and Mean Jeans don't have the heart to let you down.

Have Mean Jeans reinvented pop-punk? Not even a little! But unlike far too many generic pop-punk groups of years past, this is a band you will not soon forget. And ultimately what matters most is that they're just really good at what they do. I always knew that the next great pop-punk band would not be the one to take the sub-genre into the future, but rather the one that reminded us all why we fell in love with this kind of music in the first place. May the party never end!