It's The Ricky C Quartet! 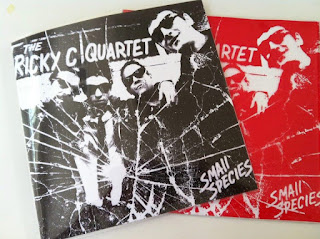 Remember 10-15 years ago when there were hardly any good English punk bands? Now there are so many great ones that even the "side projects" are freaking phenomenal. Seriously, the current crop of U.K. punk groups has to be the best in at least 20 years. And when members of The Blowouts, Johnny Throttle, and the Ten-O-Sevens start a band based on a mutual love for Slaughter and the Dogs and Radio Birdman, you just know it's gonna be the balls. The Ricky C Quartet, formed just last year, have dropped their debut single. "Small Species", another No Front Teeth/Rapid Pulse Records co-release, brings to mind the harder edge of classic Brit-punk infused with a heaping dose of Aussie adrenaline. In short, this band is 100 percent as advertised. Both tracks here deliver some snarling rock n' roll with pissed-off lyrics and red-hot guitar leads, backed by bass lines that'll get your booty bouncing. And let's face it: nobody spews profanity with the panache of the English. A sing-along refrain of "Don't fuck around me!", so delightfully acrimonious here, wouldn't sound nearly as cool if these guys were from, say, New Jersey. Both "Small Species" and "Tonight" imbue a profuse fuck-off sentiment with serious catchiness - a formula that can't lose when it's done well. All in all, this is an absolutely ripping debut record. Nothing fancy or unexpected here - just great punk played furiously and brilliantly. Where have all the boot boys gone?