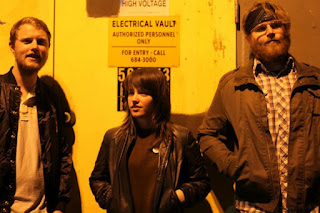 The Seattle trio Big Eyes is one of my favorite "new" bands of the last couple years. And if it's possible, they're actually getting better! New single "Back From the Moon" is the record for you if you wish Joan Jett sounded more like the Fastbacks and the Fastbacks sounded more like Joan Jett. The lazy music reviewer cliche about Big Eyes is that they sound like The Muffs. Fair enough. But let's be real. The Muffs haven't even sounded like The Muffs since like 1996. Big Eyes pick up where The Muffs left off when they still rocked. And this new single in particular is total gold. If "Back From the Moon" were any catchier, the CDC would step in and have it shut down. Kate Eldridge on lead vocals can really belt it, and what I love about Big Eyes' version of powerpop/punk is how raw and ballsy it sounds! Trust me: this track kills. Actually, you don't have to trust me. Click on the vid below and hear for yourself! "I Don’t Care About Friday Night" is in a similar vein - upbeat, hard-driving, and crammed to the brim with melodies to die for. Stellar record! If you're not hip to this band, go stream their debut album immediately. Then you too can be psyched for the next one to come out!