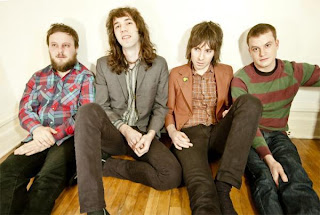 You would think I'd soon to be running out of Canadian bands to write about. But noooooo! The Canadian Invasion is growing stronger by the hour. The sounds are resonating like thunder. It's like these bands have been fortified with super powers. I think it might have something to do with those Canadian pharmacy emails I keep getting.

Ottawa's Mother's Children may be the best band yet to come charging from the North, and their new single is straight up HOT! My goodness! If you like power pop, THIS is how you do it! "See The Other Guy" is a classic '79-style gem - and it's a hit from the very first note. It's catchy as hell, and to boot it's got some real balls to it. Power pop with power- how about that?! I love the infectious guitar leads, the driving power chords in the chorus, and the throaty, impassioned vocal. I appreciate it when someone's singing about heartbreak and he genuinely sounds like he's heartbroken. Without a doubt, this tune's in the running for best song of the year. And "Don't Go Too Far" is a perfect B-side, full of harmonies and hooks and muscular instrumentation reminiscent of The Who. Coming on the heels of last year's great Are You Tough Enough? EP, this single puts Mother's Children in the heart of the "Who's the best band out there?" conversation. Dig!

What is the best way to get in contact? My email is destroynateallen@gmail.com I have a question about a review. Thanks! Keep up the good work. I dig your taste!