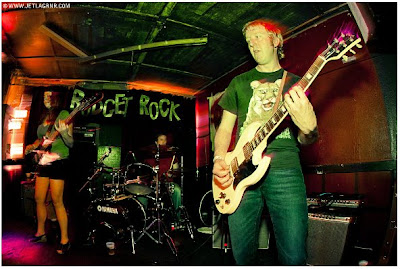 It's been too long since I've reviewed a band like City Deluxe. Points off for me! Sometimes some straight-up kick-ass rock n' roll is exactly what the doctor ordered! Good god, these five cats from Oakland really rip it up! They take the best elements of 1970s "Camaro rock" and mix in hints of the Stones, Dictators, and good old power pop. Jason, the singer, is a little over the top in an entirely good way. Toby, the lead guitarist, is a total monster. I mean, the dude's unreal. And the songs? Top drawer! Not only has the band made them available for free streaming on their bandcamp page, but they've also set a "name your price" fee for downloads. Pay $0 if you want, or pay $5. Or $1,000 maybe! Either way, you're getting some boss tunes! The "hit" is "Go To the City", with its simple chorus, killer guitar leads, and unrelenting swagger. "Too Much Rockin'" is a jam as well - just a little bit poppier. It reminds me a little of The Real Kids. Or better yet, imagine a male-fronted Top Ten (How's that for an Oakland reference?!). "Conjugal Visit" is surely their bring-down-the-house live number. It's about, well, you know! Part golden oldies ballad and part '70s punk rock n' roll fireball, it would be the band's signature song if they didn't already have one! Ideally, some or all of these songs will end up on a vinyl record if enough people pay real money for the downloads. I'm hoping they'll come out on cassette as well so you can crank them in your vintage muscle car tape deck while you're drivin' and/or lovin'. Sometimes rock n' roll is mostly cliche, and sometimes it's the real deal. Real deal here, folks!

Thanks Lord Rutledge!!! Come get your free City Deluxe Beer Koozie at our next show!!!
City Deluxe