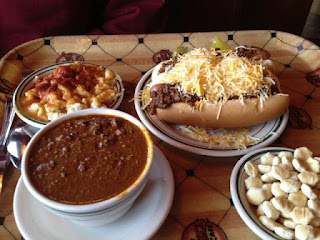 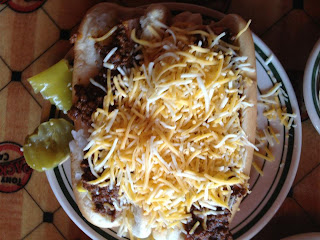 Tony Packo's, a Toledo institution for 80 years, easily rates as my #1 favorite eating establishment. I've eaten there 12 or 13 times, and never has it failed to be absolutely awesome. I was introduced to Packo's by my wife, a native Toledoan. Any time we're in town, or even passing through, I can't stand to miss Packo's. I remember one time we were in Toledo and did not have time to make it to Packo's. I wept for hours.

Our most recent visit, which took place this past Thursday, was undertaken with a slight bit of uncertainty. It was our first trip to Packo's since it was sold earlier this year. We had to wonder. Would it still be the same under new ownership? Would the food be up to its usual, iconic standards? The answer was an unequivocal yes!

If you've never had a Hungarian hot dog before, that's understandable. There was no such thing until Tony Packo I invented it eight decades ago. And to my knowledge, there is no Hungarian hot dog anywhere else in this world besides at Tony Packo's. A Packo's dog is nothing like a regular hot dog. Really it's a Hungarian sausage on a hot dog bun, with a spice profile to die for and a spectacularly snappy bite. Topped with chili sauce and shredded cheese, it's a mouthful and a delightful one at that. Hands down, it's the best hot dog I've ever had. Just thinking about it right now is giving me tingles. Ahhhh! If the Packo's dog were the only thing on the menu, it would probably still be my favorite restaurant. But here's the bonus: the chili might be even better! Okay, maybe not better. But at least as good. I'm somewhat nuts about chili, and for years I've kept a mental top five list of the best chilis out there. Whatever used to be #1 lost its spot once I tried the chili at Packo's. Now there's such an immense gap between #1 and #2 that I've decided to leave the #2 spot vacant out of respect. They don't call it their "famous" chili for nothing. It's all in the spices - in this case a Hungarian recipe that's stood the test of time. I would eat a tub of the stuff. And speaking of Hungarian spices, the must-have side dish at Packo's has to be the paprikas dumplings. So simple, yet so good. Also to not be missed are their sweet hot pickles!

The problem with only getting to eat at Packo's once or twice a year is that I can't afford to experiment with my food selections. I've never had the stuffed cabbage, chili mac, roast beef, or mashed potatoes. It just doesn't pay to stray. I like to go with a cup of chili, two dogs, a side of paprikas, and perhaps an order of pickles. You don't mess with perfection. If I'm feeling particularly gluttonous, I'll order the M*O*A*D, which is a ginormous version of the Packo's dog that's four times the size of a regular dog. I've had the chicken chili a couple of times, and that's aces too. My wife ordered the chili sundae last week, and boy is that a sight to see. It comes out in a sundae dish, with taco chips on the side, and it's filled with chili, cheese, and sour cream. I know, right? It's a food dream come true! And be sure to save room for the strudel!

I have seen some comments on-line about Packo's being hit-or-miss these days. Maybe we've just been lucky, but for us it's always been a hit. I can't vouch for all five locations, but the Packo's in Sylvania is where we went last week. And it was as good as it's ever been. We've also been to The Packo's by the baseball stadium a number of times and have never left disappointed. All the well-documented legal issues and family squabbles that have gone on behind the scenes have not seemed to affect the quality of the food. If you're anywhere within driving distance of Toledo and have never had a Packo's dog, it's not a question of if you should go. It's a question of when you're going.

http://www.tonypacko.com/
Posted by Lord Rutledge at 6:37 AM