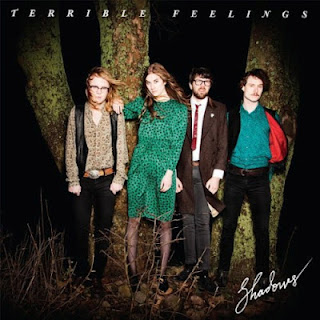 But while it's neat that Terrible Feelings are different, what's most important is that they're really damn good. As musicians and songwriters, they're exceptionally gifted. Iwansson has one hell of a voice, especially when she goes out of her ice queen comfort zone and really pushes the intensity. Given the excessively dark nature of the songs, there are moments when it all feels a little too much over the top. Hearing lyrics like "No savior can mend my apathy/it has festered inside of me/deprived me of courage and made me a minion of heresy", I'm really tempted to laugh out loud. But for the most part, this band genuinely succeeds in executing its vision of a gloom rock/power pop hybrid. Not many bands could effectively drop the phrase "when your desolation devours you completely" into the hook line of a pop song, but Terrible Feelings pull it off! The group is at its best, I think, when Iwansson is more angry than maudlin ("Lady Luck"). And at times T.F. come off like a bleak, feminized Buzzcocks, powering through infectiously anguished love songs like "Simultaneous Beats" and "Another Night". If you're making mixes of the best songs of 2012, superb opening cut "Days To Come" is not to be missed. Perhaps I could do with a couple more songs like "Days To Come" and a couple less like "Wicked Skull (pt. 2)". But that's nitpicking. You can't begrudge a band like this some small measure of self indulgence. After all, they are called Terrible Feelings! And all in all, the majority of the tracks are first rate. Moreover, I really admire that the record isn't padded with songs from prior singles (which are tremendous, by the way). Shadows is a fine debut. And given the vast potential of this band's unique style, surely there are even better albums yet to come. Misery ain't going out of style anytime soon.