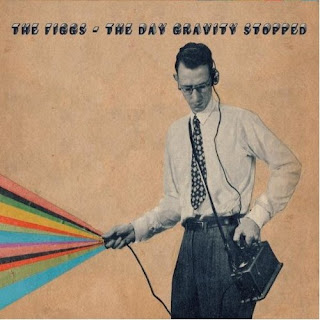 Holy cow, The Figgs have made their London Calling! By my count, The Day Gravity Stopped is their ninth proper LP and their second double album. That's right. I said double album. As in two slabs of vinyl. When you're celebrating 25 years as a band, you've got to go big!

And go big The Figgs sure have! The Day Gravity Stopped is all over the place stylistically, and if you were hoping for another Lo-Fi At Society High or Sucking In Stereo, you're bound to be disappointed. But if you're just looking forward to continued greatness from The Figgs, you'll get exactly that. A full quarter century into its existence, this is by no means a band that sounds like it's bored with itself. By all accounts, these guys continue to put on arguably the best live show in all of rock n' roll. And Mike and Pete's legendary songwriting chops are shining brighter than ever. At worst, there are perhaps two songs out of 20 here that might have been better left on the cutting room floor. That's pretty good for an album as ambitious as is, which takes inspiration from sources as varied as Buddy Holly ("Brain Be Gone"), The Beatles ("Jupiter Row", "Avec U"), '70s soft rock ("Always Time"), country rock ("Can't Sit Still"), blue-eyed soul ("Do Me Like You Said You Would"), late-period Replacements ("Wait 'till Dawn"), classic Springsteen ("Camden Love-In"), and new wave pop ("Chinese Handcuffs"). And what's so remarkable is that they tackle all this stylistic diversity and genuinely pull it off! This may or may not be a concept album, and for sure it's meant to be enjoyed as a complete work (ideally with headphones, to take in all that skillful weaving of '70s style electric piano and post-modern synthesizers). But of course we fans always look for those individual standout songs that we can add to our ever-growing lists of Figgs standards. There are indeed a few of those to be heard. I'd put "Do Me Like You Said You Would" up there with anything in The Figgs catalog. It's kind of like the Stones' "Beast of Burden" meets Prince...or something like that. It's actually the only song on the album to run longer than four minutes, but it seems like it's way shorter than that. A guy named Graham Parker says it's a hit. You may have heard of him. "The Recap", with its rumba rhythm and retro-futuristic keyboards, is contemporary and cool and catchy as hell. "She Can't Say No Either", buoyed by a contagious guitar hook and slick vocal overdubs, could pass for a long lost new wave hit from 1982. And if there's such a thing as a "typical" Figgs song, "On the Grounds of Stately Homes" had me loving this album from the get-go.

I don't want to say I'm surprised that The Day Gravity Stopped is so good. A better phrasing is that I'm amazed by The Figgs' sustained brilliance after 25 years. Usually when a band this seasoned puts out an album of this caliber, it's a "comeback" from years of inactivity or phoned-in mediocrity. But The Figgs never went away. They never stopped touring or making great music. If they've strayed from the musical style that made their early records such a blast, we can hardly fault them for challenging themselves creatively. And truth be told, The Figgs were never a formulaic band even in their heyday. Some bands are great at one particular type of music, and others are just great bands, period. The Figgs could try any genre of music, and they'd be awesome at it. They're just class. Last year I named them one of the eleven greatest bands of the 2000s. At the rate they're going, they'll make my 2010s list as well!