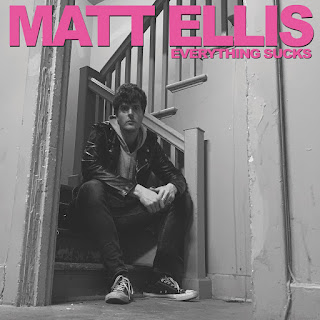 Hamilton, Ontario's Matt Ellis was one of the many musical artists who helped get me through 2020 lockdown with my sanity intact. Those were crummy times, but the music sure was good. That spring/summer, Ellis released some of the most inspired Ramones-inspired recordings I've ever heard. Sadly, it's nearly two years later and we're still dealing with this COVID shit. So it's hard to argue with the sentiment of Everything Sucks, Ellis's new digital single. On this release, he tears into two blistering songs about having no hope for the human race and hating everything. Would you expect anything less from the author of hits such as "Rat Fucker" and "It Stinks Like Shit"? As always, his execution of this musical style is flawless. He takes an already stripped-down musical approach and strips it down even more to the barest bones. Both of these tracks are 100% DIY homemade efforts -- played and recorded entirely by Ellis. These are 60-second anthems of the times and well worth your two bucks! I should also add that Full Moon Fever, the LP which compiled all of Ellis's 2020 recordings, is still available and about to be repressed. Get it from Surfin' Ki Records or directly from Ellis's Bandcamp!
-L.R.
https://mattellis333.bandcamp.com/album/everything-sucks
http://surfinkirecords.bigcartel.com/product/matt-ellis-full-moon-fever-lp
Posted by Lord Rutledge at 7:06 AM