Shanda & The Howlers - It Ain't Easy 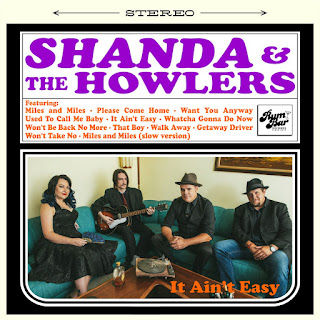 If you sometimes find yourself listening to your favorite soul and R & B records from the 1960s and lamenting that nobody makes music like this anymore, I'm here to tell you that at least one band does! It Ain't Easy, the third album from Las Vegas based foursome Shanda & The Howlers, releases today on  on compact disc on Rum Bar Records. The CD looks uncannily like a miniature version of an LP from 55 years ago (the only thing missing are liner notes on the back!). The music, I'm thrilled to say, fully lives up to the packaging.
Malibu Lou genuinely loves every single piece of music he releases. But he's not one to blow smoke. So when he told me last year that It Ain't Easy was the best album he'd heard in ten years, that got my attention. I didn't need much convincing to begin with. Shanda & The Howlers, authors of two albums that have placed in my year-end top ten lists, were already one of my favorite bands. But Lou was right: this new album is a monster! It Ain't Easy is the perfect marriage of the pop appeal of the band's debut Trouble and the old school rawness of follow-up Hurt For Me. On Hurt For Me, you could hear the band beginning to stretch beyond its roots in Motown/Stax soul. It Ain't Easy takes that progression to another level. It's at its core a rhythm and blues record, but it embraces a wide variety of other influences from mid-century American music.
What makes It Ain't Easy such a home run is that it's exceptional in all of the necessary departments: vocals, musicianship, songs, and production. Shanda Cisneros is unquestionably one of the best singers I've ever had the privilege to review (my god, that tone!). The creative chemistry she has with bassist and songwriter Luke Metz is something special. She sings Metz's lyrics as if they were coming from her own soul. And Metz has pulled off something that a lot of modern musicians struggle to do: crafting a collection of songs that his musical heroes would have been proud to have written. You could fool almost anyone into believing that "Miles and Miles", "Please Come Home", and "Used To Call Me Baby" are long-lost R & B chart hits from the '60s. "Whatcha Gonna Do Now" would sound perfectly in place on a compilation of classic girl group hits. But this album is every bit as good when The Howlers stray from their wheelhouse. Taking full advantage of Cisneros's powerful pipes, the Sonics-style garage rocker "Want You Anyway" is nothing short of electrifying. "Won't Be Back No More" sounds like it should be spinning on the turntable in James Bond's bachelor pad. "That Boy" (a duet with the Delta Bombers' Chris Moinichen) is an upbeat jazzy number that's sure to get you up and dancing regardless of what you may be doing at the moment. The title track is a gritty shot of traditional blues propelled by a vocal that will knock your socks off.
Soul music made by contemporary artists usually falls short for me in one of two ways: either it's tainted by modern influences and production, or it's just not good enough to rival the legendary records it emulates. Shanda & The Howlers have managed to avoid those pitfalls and produce three of the finest rhythm & blues albums of recent memory. It Ain't Easy is by far the best of the three, and it finds The Howlers back at home on Rum Bar! I'm not one for putting numerical ratings on art, but it speaks volumes that It Ain't Easy has remained in constant rotation in my car CD player for the last seven weeks. I just can't enough of these songs! The album's production by John Fallon and Joe Lawless with Luke Metz is warm and crisp, never getting in the way of all the exceptional musical and vocal performances. And I love that the album is bookended by two different versions of "Miles and Miles" -- one reminiscent of a Motown hit and the other a tender lullaby. Music this timeless is exactly what the modern world needs more of! It Ain't Easy is available now from Rum Bar Records and all the major streaming & digital platforms!
-L.R.
https://rumbarrecords.bandcamp.com/album/it-aint-easy
https://www.facebook.com/shandathehowlers
https://www.facebook.com/RumBarRecords
Posted by Lord Rutledge at 9:20 AM